Voices // 2 years ago
U.S., India must save the Maldives
Political upheaval has deepened in the Maldives, caused by the reaching out for dictatorial power by Abdulla Yameen, who illegally toppled Mohammad Nasheed. 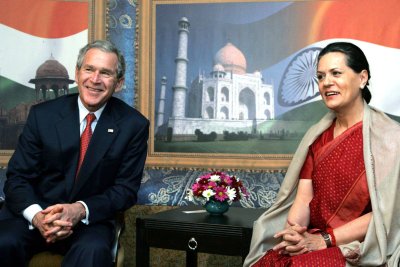 World News // 5 years ago
Indian parliament disrupted over National Herald case
India's parliament was disrupted Tuesday by members of the National Congress Party, who say a court case against two of its leaders is a political vendetta.

During Congress rule terrorism was countered effectively and firmly, whereas during BJP regime terrorists were treated like guests and released in their own country

The threats from across the borders with China and Pakistan had been the main focus of the armed forces ... so far. But with the LTTE carrying out a series of air attacks in the last nine months, it has become imperative to be prepared for the threat emanating to the country's security from its vast southern coastline and sea-borne intrusions

We call upon the government of India and people of India to be magnanimous, to put the past behind them

My husband always said that one day his innocence would be proved. I hope the people who caused him so much pain will now rethink the falsehoods they spread about him

Rajiv Gandhi was the elder son of Indira and Feroze Gandhi. He was educated at Cambridge, where he met Italian-born Sonia Gandhi, whom he later married. After Cambridge, he became a professional pilot for Indian Airlines. He remained aloof from politics despite his family's political prominence. It was only following the death of his younger brother Sanjay Gandhi in 1980 that Rajiv entered politics. Following the assassination of his mother in 1984 after Operation Blue Star, Indian National Congress party leaders nominated him to be Prime Minister.

Rajiv Gandhi led the Congress to a major election victory in 1984 soon after, amassing the largest majority ever in Indian Parliament. The Congress party won 411 seats out of 542. He began dismantling the License Raj - government quotas, tariffs and permit regulations on economic activity - modernized the telecommunications industry, the education system, expanded science and technology initiatives and improved relations with the United States.

FULL ARTICLE AT WIKIPEDIA.ORG
This article is licensed under the GNU Free Documentation License.
It uses material from the Wikipedia article "Rajiv Gandhi."
Back to Article
/