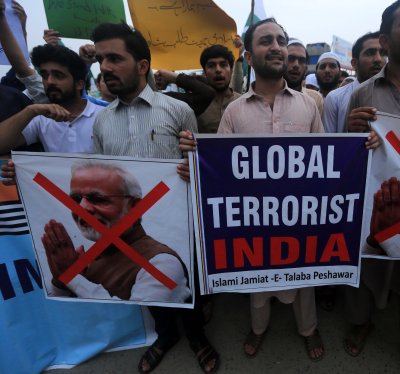 World News // 5 months ago
'Kashmir Hour' across Pakistan offers support for embattled India regions
Tens of thousands of Pakistanis participated Friday in an observance to support the Indian-controlled Jammu and Kashmir territories after they were stripped of their autonomy this month.

World News // 6 months ago
India lawmakers set to ratify bill to strip Kashmir, Jammu of autonomy
Internet and communications remained down amid an ongoing lockdown in Kashmir Tuesday, a day after the Indian government said it would end the special autonomous status it's had for decades.

World News // 7 months ago
India opposition leader quits after crushing electoral defeats
Rahul Gandhi officially stepped down Wednesday as India's main opposition leader, with a stern warning to his party that it "must radically transform itself" after its defeat in national elections this spring.

World News // 8 months ago
India Election: PM Modi commands strong lead in early count
As the counting of votes continues in the world's biggest election, an early tally showed that Indian Prime Minister Narendra Modi was soaring to a second term as his Bharatiya Janata Party was leading in 292 of 543 seat

World News // 1 year ago
Indian farmer protest draws support from high-ranking government officials
A sea of farmers stormed Parliament Street in New Delhi with a list of demands, prompting one official to call for the ousting of India's prime minister.

Rahul Gandhi (Hindi: राहुल गांधी ; born 19 June 1970) is an Indian politician and member of the parliament of India, representing the Amethi constituency. His political party is the Indian National Congress.

Rahul Gandhi was born in Delhi on 19 June 1970 as the first of the two children of Rajiv Gandhi, who later became the Prime Minister of India and Sonia Gandhi, who later became President of Indian National Congress, and as the grandson of the then Prime Minister Indira Gandhi. He is also the great-grandson of India's first Prime Minister, Jawaharlal Nehru. Priyanka Vadra is his younger sister. His mother, Sonia Gandhi, is originally from Turin, Italy; his parents met in Cambridge, England where she was a student at Bell Educational Trust's language school and he, an engineering student at Trinity College. They married in New Delhi in 1968. Rajiv Gandhi later obtained a commercial pilot's license and was a pilot in Indian Airlines when Rahul was born.

Rahul Gandhi attended St. Columba's School, Delhi before entering The Doon School in Dehradun (Uttarakhand), also his father's alma mater, from 1981–83. Meanwhile, his father had joined politics and became the Prime Minister on October 31, 1984 when Indira Gandhi was assassinated. Due to the security threats faced by Indira Gandhi's family from Sikh extremists, Rahul Gandhi and his sister, Priyanka were home-schooled since then. Rahul Gandhi joined St. Stephen's College, Delhi in 1989 for his undergraduate education but moved to Harvard University after he completed the first year examinations. In 1991, after Rajiv Gandhi was assassinated by LTTE during an election rally, he shifted to Rollins College due to security concerns and completed his B.A. in 1994. During this period, he assumed the pseudonym Raul Vinci and his identity was known only to the university officials and security agencies. He further went on to obtain a M.Phil from Trinity College, Cambridge University in 1995. After graduation, Rahul Gandhi worked at the Monitor Group, a management consulting firm, in London. In 2002 he was one of the directors of Mumbai-based technology outsourcing firm Backops Services Private Ltd.

FULL ARTICLE AT WIKIPEDIA.ORG
This article is licensed under the GNU Free Documentation License.
It uses material from the Wikipedia article "Rahul Gandhi."
Back to Article
/