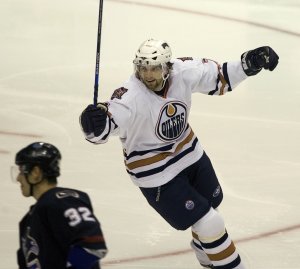 Raphael "Raffi" Torres (born October 8, 1981) is a Canadian professional ice hockey forward who currently plays for the Vancouver Canucks of the National Hockey League (NHL). He was drafted by the New York Islanders fifth overall in the 2000 NHL Entry Draft. He has additionally played in the NHL for the Edmonton Oilers, Columbus Blue Jackets, and the Buffalo Sabres. Torres is known as a physical, forechecking forward with offensive capabilities.

Torres was drafted out of the Ontario Hockey League (OHL), where he played three seasons with the Brampton Battalion. He was a two-time OHL Second Team All-Star during his junior career. Beginning in 2001–02, he turned professional with the Islanders' American Hockey League (AHL) affiliate. He spent the better part of two seasons in the AHL before the Islanders traded him to the Oilers in 2003. He played five seasons in Edmonton, becoming a full-time NHL player with the club. He recorded career numbers as an Oiler in 2005–06, while also helping them to the Stanley Cup Finals that year. In the 2008 off-season, he was dealt to the Blue Jackets, where he played the better part of two seasons. After a brief stint with the Sabres in 2009–10, he signed with the Canucks. Internationally, he represented Canada at the 2001 World Junior Championships, winning a bronze medal.

Torres played major junior with the Brampton Battalion of the Ontario Hockey League (OHL), beginning in 1998–99. He scored at a point-per-game pace in his rookie season with 35 goals and 62 points, second in team-scoring to Jason Spezza. Improving to a team-leading 43 goals and 91 points in his second junior season, he finished seventh in league scoring and was named to the OHL Second All-Star Team. Qualifying for the playoffs, the Battalion were eliminated in the first round. Torres added seven points in the six-game series.

FULL ARTICLE AT WIKIPEDIA.ORG
This article is licensed under the GNU Free Documentation License.
It uses material from the Wikipedia article "Raffi Torres."
Back to Article
/