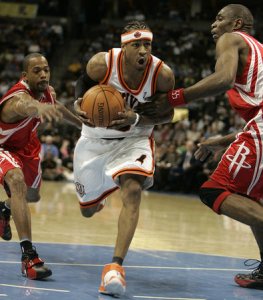 Alston grew up in Jamaica Queens, New York and is widely regarded as one of the best streetball basketball players of all time. He is often referred to by his streetball nickname "Skip to My Lou" or "Skip 2 My Lou", a name he received for skipping while he dribbled the ball.

He has been associated with shoe manufacturer And 1's "Mix Tape Tour" promotional streetball team. And 1 has become well known because of his tape, which his coach sent to And 1. And 1 printed 500,000 copies, and the tape was offered as a free gift when their products were sold. Alston was a poster boy for the street league, and he carried his reputation into the National Basketball Association.

FULL ARTICLE AT WIKIPEDIA.ORG
This article is licensed under the GNU Free Documentation License.
It uses material from the Wikipedia article "Rafer Alston."
Back to Article
/