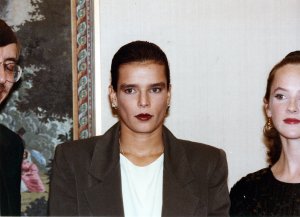 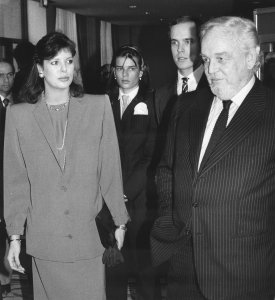 Princess Stéphanie of Belgium (French: Stéphanie Clotilde Louise Herminie Marie Charlotte, Dutch: Stefanie Clotilde Louise Hermine Marie Charlotte; May 21, 1864, Laeken, nearby Brussels – August 23, 1945, Pannonhalma) was the wife of Crown Prince Rudolf of Austria. She was the daughter of King Leopold II of Belgium and his wife, Archduchess Marie Henriette of Austria, and was born at the Royal Castle in Laeken. Her grandfather had been Belgium's first king and her aunt was Empress of Mexico.

Archduke Rudolf, heir apparent to the imperial throne of Austria-Hungary, was under pressure from his parents to marry, and young Stéphanie was just about the only available royal princess of Roman Catholic faith at the time who was not already a close relative of Rudolf by blood. Rudolf arrived in Brussels on 5 March 1880 to spend time with Stéphanie. He announced their engagement a mere two days later. However, the wedding had to be postponed because the bride had not yet reached puberty.

On 10 May 1881, several weeks before her 17th birthday, she married Crown Prince Rudolf in the St. Augustine's Church in Vienna. Among the illustrious attendees were the future King Edward VII of the United Kingdom and his nephew, the future German Emperor Wilhelm II.

FULL ARTICLE AT WIKIPEDIA.ORG
This article is licensed under the GNU Free Documentation License.
It uses material from the Wikipedia article "Princess Stephanie."
Back to Article
/