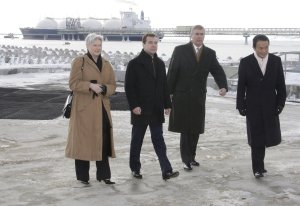 Voices // 3 months ago
Queen Elizabeth's Platinum Jubilee comes amid her declining health, royal backlash
A platinum jubilee is unprecedented for the British royal family. While historic, this year's celebration of Queen Elizabeth's 70 years on the throne comes at an awkward time for the monarch.

U.S. News // 5 months ago
Prince Andrew settles sexual abuse lawsuit with Virginia Giuffre, avoids trial in NYC
Britain's Prince Andrew has reached an agreement to settle a lawsuit filed by Virginia Giuffre that says she was sexually assaulted by the royal as part of a trafficking operation when she was a minor, officials said.

World News // 6 months ago
Canada's Prince Andrew High School moves to adopt a new name
In an attempt to distance itself from the controversy surrounding the Duke of York, a Canadian high school named after Prince Andrew plans to change its name.

Prince Andrew, Duke of York (Andrew Albert Christian Edward; born 19 February 1960), is the second son and third child of Queen Elizabeth II and Prince Philip, Duke of Edinburgh. At the time of his birth, he was second in the line of succession to the thrones of seven independent sovereign states known as the Commonwealth realms; however, after the births of two children to his elder brother, and an evolution of the Commonwealth, Prince Andrew is currently fourth in line to the thrones of 16 countries: the United Kingdom, Canada, Australia, New Zealand, Jamaica, Barbados, the Bahamas, Grenada, Papua New Guinea, the Solomon Islands, Tuvalu, Saint Lucia, Saint Vincent and the Grenadines, Belize, Antigua and Barbuda, and Saint Kitts and Nevis. Consequently, he is also fourth in line to the position of Supreme Governor of the Church of England.

He also holds the actual rank of commander and the honorary rank of Rear Admiral in the Royal Navy, in which he served as an active duty helicopter pilot and later instructor in helicopter flight. He saw active service during the Falklands War, flying on multiple missions including anti-surface warfare, Exocet missile decoy and casualty evacuation. Prince Andrew and his nephew Prince Harry of Wales are the only two living members of the Royal House to have served under direct enemy fire.

In 1986, Prince Andrew married Sarah Ferguson; the couple's marriage, subsequent separation and eventual divorce attracted a high level of media coverage. As well as carrying out various royal duties, he served as the United Kingdom's Special Representative for International Trade and Investment until July 2011.

FULL ARTICLE AT WIKIPEDIA.ORG
This article is licensed under the GNU Free Documentation License.
It uses material from the Wikipedia article "Prince Andrew."