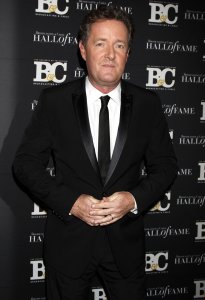 TV // 1 year ago
Sharon Osbourne on 'Talk' exit: 'It changes from day to day what is correct'
Sharon Osbourne broke her silence about her departure from "The Talk" last month on Friday's edition of "Real Time with Bill Maher."

TV // 1 year ago
'The Talk' taking break amid Sharon Osbourne controversy
Tapings of "The Talk" have been canceled Monday and Tuesday due to tension among the hosts of the daytime chat program.

Music // 3 years ago
Geri Halliwell calls Mel B hookup claims 'disappointing' and 'hurtful'
Geri Halliwell spoke out after her Spice Girls band mate Mel B said they once had a sexual encounter.

I talked with the Prime Minister last night, and he was very concerned about Susan. He heard what happened and wanted to make sure she was OK

Morgan branched into television mainly as a presenter, but has become best known as a judge or contestant in reality television programmes. In the UK, he was a judge on Britain's Got Talent. Morgan is best known in the United States as a judge on the show America's Got Talent, and as the winner of The Celebrity Apprentice. On 17 January 2011, he began hosting Piers Morgan Tonight for CNN in the timeslot previously occupied by Larry King Live before the retirement of host Larry King.

Morgan has authored eight books, including three volumes of his memoirs.

FULL ARTICLE AT WIKIPEDIA.ORG
This article is licensed under the GNU Free Documentation License.
It uses material from the Wikipedia article "Piers Morgan."