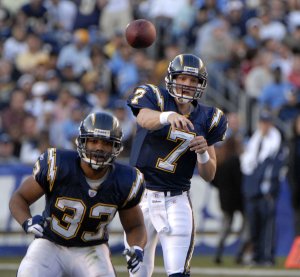 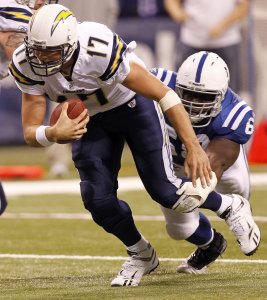 Philip Michael Rivers (born December 8, 1981, in Decatur, Alabama) is a professional American football quarterback for the San Diego Chargers of the National Football League (NFL). He was one half of the Manning-Rivers draft trade which sent him to San Diego and the 1st overall pick, Ole Miss quarterback Eli Manning, to the New York Giants. Rivers played college football at North Carolina State University. Through Week 15 of the 2010 season, Rivers' career passer rating - at 97.8 - is best all-time among NFL quarterbacks with at least 1,500 passing attempts.

After starting Chargers quarterback Drew Brees went to the New Orleans Saints following the 2005 season, Rivers came off the bench to lead the Chargers to a 14-2 record in his first season as a starter. In 2007, he helped the Chargers win their first playoff game since 1994 after beating the Tennessee Titans in the wildcard round of the 2007 playoffs and eventually leading them to the AFC Championship game. He has a career total of 12 fourth quarter comebacks, his most recent being on November 7, 2010, when he led the Chargers to a 29-23 win over the Houston Texans.

Rivers was born in Decatur, Alabama, where his father Steve was the head coach of Decatur High. Philip went to Decatur then moved to Athens. As part of a fifth-grade project, he had to make a poster about his dreams and aspirations. On the poster, he pasted his face over that of a Minnesota Vikings player who had appeared on a cover of Sports Illustrated. He has worn the number 17 since ninth grade; it is in honor of his father, who wore the same number in high school. After his dad, Steve, got the head coaching job, Philip played high school football at Athens High School in nearby Athens, Alabama.

FULL ARTICLE AT WIKIPEDIA.ORG
This article is licensed under the GNU Free Documentation License.
It uses material from the Wikipedia article "Phillip Rivers."
Back to Article
/