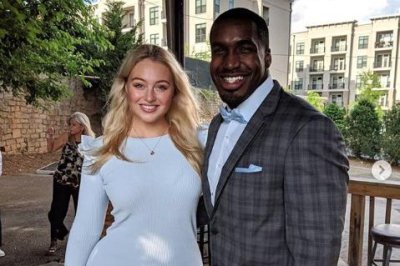 Entertainment News // 9 months ago
Iskra Lawrence celebrates pregnancy with $10K pledge
Aerie model Iskra Lawrence is expecting her first child with Philip Payne and will give $10,000 to a woman struggling with infertility.

I don't mind a bookseller deciding they are for this age group or that, or a teacher giving one of my books to a child because they think it is appropriate. But I don't want to see the book itself declaring officially, as if with my approval, that it is for readers of 11 and upwards or whatever. I write books for whoever is interested. When I write a book I don't have an age group in mind. ... The book should be suited to the individual child

I don't mind anybody having an opinion about my books

Normally I write a book, give it to the illustrator and he gets on with the pictures

Philip Pullman CBE, FRSL (born 19 October 1946) is an English writer from Norwich. He is the best-selling author of several books, most notably his trilogy of fantasy novels, His Dark Materials, and his fictional biography of Jesus, The Good Man Jesus and the Scoundrel Christ. The first of His Dark Materials has been turned into the film The Golden Compass and the first two books from his Sally Lockhart series have been adapted for television.

Philip Pullman was born in Norwich, England, the son of Audrey Evelyn (née Merrifield) and Royal Air Force pilot Alfred Outram Pullman. The family travelled with his father's job, including to Southern Rhodesia where he spent time at school.

FULL ARTICLE AT WIKIPEDIA.ORG
This article is licensed under the GNU Free Documentation License.
It uses material from the Wikipedia article "Philip Pullman."
Back to Article
/