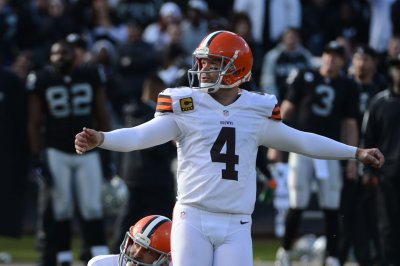 NFL // 1 year ago
Philip Rivers' record-setting effort leads Chargers over Cardinals
Philip Rivers set a single-game NFL record by completing his first 25 passes and the Los Angeles Chargers rolled to a 45-10 win against the Arizona Cardinals.

NFL // 1 year ago
Wilks under fire in Cardinals' disappointing season
After losing to what was the worst team in the NFL, the Oakland Raiders, first-year Arizona Cardinals coach Steve Wilks is feeling the heat from fans and media that he may have a one-year-and-done career there.

NFL // 1 year ago
Fantasy Football Who's In, Who's Out: Week 8 NFL injury report
Coming off a Thursday night game in which the Houston Texans lost Will Fuller for the season with a torn ACL, several other teams declared their receivers out.

NFL // 1 year ago
Rosen provides hope for winless Cardinals
The Arizona Cardinals are the only winless team left in the NFL but first-year coach Steve Wilks sees some promise in his team following Sunday's 20-17 loss at home to Seattle.

NFL // 1 year ago
Seahawks beat Cardinals but suffer costly injuries
Overcoming a 0-2 start to the season, the Seattle Seahawks clawed back to .500 with a gut-wrenching 20-17 victory over the Arizona Cardinals.

NFL // 1 year ago
Breida gives 49ers hope for ground game
The San Francisco 49ers entered the season with some questions about their ground game after starting running back Jerick McKinnon suffered an ACL injury in practice before the season began. Some of those concerns were allayed in Sunday's 30-27 victory over the Detroit Lions.

NFL // 2 years ago
Seattle Seahawks' playoff hopes end with loss to Arizona Cardinals and Atlanta Falcons win
For the first time in five years, the Seattle Seahawks saw their season end short of the playoffs.

I had to be ready and the offense once again moved the ball down the field like they had to. I just did my part

Dawson attended Lake Highlands High School in Dallas, Texas and was a letterman in football. As a senior, he was a starter at both kicker and offensive tackle until he hurt his knee in a preseason scrimmage. He thought he might have to have season ending surgery, but he gutted it out, stuck to kicking, and was named as an All-American and the Southwest Region Offensive Player of the Year by SuperPrep. Dawson graduated from Lake Highlands High School in 1993.

Dawson attended the University of Texas at Austin, where he was a four-year letterman in football. After redshirting his freshman year, he scored 80 points his first year of playing. He also tied a school record with 54 consecutive extra points. The following season he made honorary All-America honors while leading the Longhorns in scoring. He made first-team All-America his junior and senior years, while simultaneously making All-Big 12. He was a B.A. in political science. Dawson is famous for his 1995 game-winning field goal against University of Virginia; booting a 50-yarder against a 30-MPH wind to give Texas a dramatic 17-16 victory as time expired.

FULL ARTICLE AT WIKIPEDIA.ORG
This article is licensed under the GNU Free Documentation License.
It uses material from the Wikipedia article "Phil Dawson."
Back to Article
/