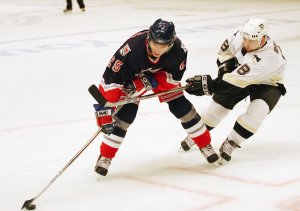 Petr Průcha (born September 14, 1982, in Chrudim, Czechoslovakia) is a professional ice hockey forward for the Phoenix Coyotes of the National Hockey League.

Petr Průcha was drafted by the New York Rangers in the 8th round of the 2002 NHL Entry Draft, 240th overall. He played 47 games in the 2004–05 season for HC Moeller Pardubice in the Czech Republic League, scoring seven goals with 17 points.

In the 2005–06 season he moved onto the Rangers as a rookie, and under the tutelage of Jaromír Jágr, scored 30 goals and 47 points in 68 games. His 16 powerplay goals on the season broke Camille Henry's record for the single-season rookie power play goal mark for the Rangers.

FULL ARTICLE AT WIKIPEDIA.ORG
This article is licensed under the GNU Free Documentation License.
It uses material from the Wikipedia article "Petr Prucha."
Back to Article
/