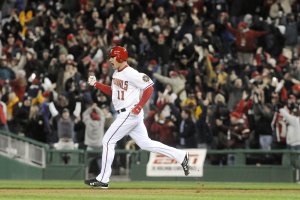 MLB // 3 years ago
Nationals, Braves hope for strong starts
After Saturday's 14-inning marathon, the Washington Nationals and the Atlanta Braves would love their starting pitchers to go deep into the series finale Sunday at SunTrust Park.

MLB // 3 years ago
Danny Duffy, Kansas City Royals shut down Colorado Rockies in thriller
The Kansas City Royals went from a one-hitter to clinging to a one-run lead with the bases loaded in the ninth and closer Kelvin Herrera exiting with an injury.

MLB // 3 years ago
Lorenzo Cain's walk-off single lifts Kansas City Royals past Texas Rangers
Lorenzo Cain was thinking extra innings when he hit a fly ball to right field with two outs in the ninth and the bases loaded.

MLB // 4 years ago
Chris Archer, Tampa Bay Rays cruise to 12-1 victory over Kansas City Royals
After two of their most frustrating losses of the season, the Tampa Bay Rays bounced back with one of their best wins.

MLB // 4 years ago
Eight-run inning propels Chicago White Sox to rout of Kansas City Royals
CHICAGO -- If given the chance, Matt Davidson would prefer to play every day for the Chicago White Sox. But for the time being, all Davidson can do is to make the most of each opportunity he is given.

Peter Michael Moylan (born 2 December 1978 in Perth, Western Australia) is a relief pitcher for the Atlanta Braves in Major League Baseball. Moylan features a mid ninety mile per hour fastball and throws sidearm. After the 1997 season and failing to make the Major Leagues, Moylan left the Major League Baseball system. He then took a job as a pharmaceutical salesman in Australia. At a certain point, Moylan improved his pitching and began his comeback.

Moylan broke out while playing for the Australian team in the World Baseball Classic. He was selected in that tournament following his tremendous displays in the 2006 Claxton Shield. His 96 mph fastball enabled him to strike out established major-leaguers Bobby Abreu, Marco Scutaro, Ramon Hernandez and Magglio Ordóñez. Based on his performance in this tournament, Moylan was invited to participate in spring training prior to the 2006 season with the Atlanta Braves.

Peter Moylan was signed by the Atlanta Braves and assigned to their Triple-A Richmond club. On April 11, 2006, Moylan was called up to the Atlanta Braves to replace Joey Devine in the bullpen; however he was later sent back to the Richmond club. On May 4, 2006, Moylan was called up again to help with more pitching and Tony Peña, Jr. was sent down; however, he was sent down again.

FULL ARTICLE AT WIKIPEDIA.ORG
This article is licensed under the GNU Free Documentation License.
It uses material from the Wikipedia article "Peter Moylan."
Back to Article
/