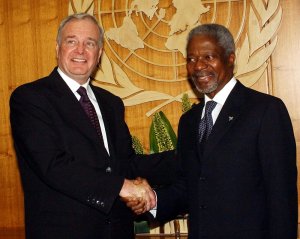 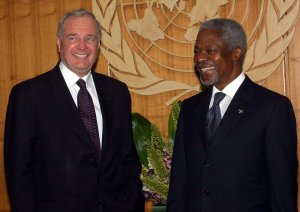 Science News // 9 months ago
Fallout particle offers insight into Fukushima nuclear accident
Researchers have found and studied a fallout particle containing uranium released by the Fukushima nuclear accident. The study offered scientists insight into the sequence of events that led to the Fukushima meltdown.
Odd News // 6 years ago
Woman on probation for embezzlement charged with fraud
A Florida bookkeeper on probation for embezzlement is accused of defrauding a recent employer of $17,000.
Defense News // 7 years ago
Coast Guard orders radar from ITT Exelis
Multi-mode radar is being supplied to the U.S. Coast Guard by ITT Exelis for use on long-range surveillance aircraft.
U.S. News // 7 years ago
WSU student dies from alcohol poisoning
A Washington state college freshman died of acute alcohol poisoning and a family member says energy drinks contributed to his death.
Music // 8 years ago
Musician falls to his death in Germany
A Swedish musician plummeted about 65 feet to his death during a performance at a German street festival, officials say.
Health News // 9 years ago
Exercise reduces desire for pot
For people considered marijuana-dependent yet don't want to quit, exercise reduces their craving for the drug, U.S. researchers suggest.
Health News // 1 decade ago
Study: Cell phones slow traffic all around
A University of Utah study says drivers talking on cell phones go slower on the freeway and cause longer commuting times for all concerned.
Business News // 1 decade ago
Knape and Vogt bought for $106 million
Wind Point Partners, a private equity firm, bought Knape & Vogt Manufacturing Co., a Michigan office product maker, for $106 million plus debt assumption.
Top News // 1 decade ago
EU Auditors: Billions wasted on Russia aid
The European Union wasted billions of euros as part of its assistance to Russia and other former Soviet republics, the European Court of Auditors said.
Top News // 1 decade ago
EU candidates rush to give up their perks
In response to growing voter complaints, hundreds of European Parliament candidates are jostling to sign away the lavish fringe benefits incumbents have.
Entertainment News // 1 decade ago
IAJE propels artist showcases
The 31st annual conference of the International Association for Jazz Education is expected to attract record labels of all sizes at the Jan. 21-24 event.
Odd News // 1 decade ago
Jazz Notes: Goings on in the jazz world
Cuban trumpeter and bandleader Mario Bauza was born this day in Havana in 1911. He died in 1993. Bauza gave trumpeter Dizzy Gillespie a major career lift in 1939 by bringing him into Cab Calloway's high profile band.
Odd News // 1 decade ago
Jazz Notes: Goings on in the jazz world
Drummer Denzil Best was born in New York City this day in 1917. He was a favorite sideman of Ben Webster, George Shearing and Erroll Garner until calcium deposits in his wrists crippled his career. He died in May 1965 after falling down a flight of steps
Odd News // 1 decade ago
Jazz Notes: Goings on in the jazz world
Bass player Al McKibbon was born this day in 1919 in Chicago. This wide-ranging player replaced Ray Brown in Dizzy Gillespie's first jazz orchestra.
Odd News // 1 decade ago
Jazz Notes: Goings on in the jazz world
Cornet legend Buddy Bolden was born this day in 1877 in New Orleans. Some consider Bolden to have been the first true jazz horn player, though much information about him is more legend than fact, and no recordings exist of his music.

Peter Martin is an English actor (born 1934) who was known in the 1980s for his TV commercials for Jewsons Hardware. He played the fish shop man in First of the Summer Wine. He also played 'Charlie the moonlighting gravedigger' in the Beiderbecke Tapes. He was in The Royle Family as Joe Carroll, and played the part of Len Reynolds in ITV's Emmerdale from 2001 until the character's death on 17 May 2007 in Emmerdale's 500th anniversary episode. He also starred in the film Brassed Off and the television series, Chucklevision.

FULL ARTICLE AT WIKIPEDIA.ORG
This article is licensed under the GNU Free Documentation License.
It uses material from the Wikipedia article "Peter Martin."
Back to Article
/