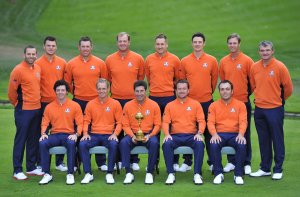 Golf // 5 years ago
2017 Zurich Classic of New Orleans: 10 teams and players to watch, picks to win
This is the first team event for a PGA Tour regular-season event since 1982. Below are 10 teams to watch in New Orleans.

Of course you can feel pressure playing at home, but I think it's more inspirational

I got off to a great start with two early birdies, but then the back nine was very difficult

When I stood on the first tee here this week, I decided I wanted to get into contention again

Hanson was born in Svedala, Sweden. He turned professional in 1998 and has played on the Challenge Tour and the European Tour. His professional wins include the 1998 Gunther Hamburg Classics on the Challenge Tour and the 2005 Open de España on the European Tour. He was a member of the Continental Europe team at the 2005 and 2007 Seve Trophy. He has featured in the top 50 of the Official World Golf Rankings and has consistently finished in the top twenty of the European Tour Order of Merit since 2007. His best position on the Order of Merit occurred in both 2008 and 2009 when he placed 16th on each occasion.

FULL ARTICLE AT WIKIPEDIA.ORG
This article is licensed under the GNU Free Documentation License.
It uses material from the Wikipedia article "Peter Hanson."