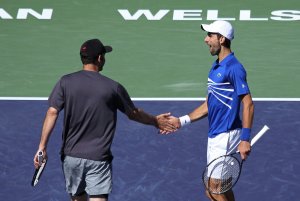 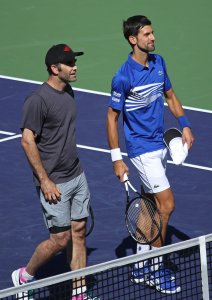 Sports News // 1 year ago
U.S. Open tennis: Williams-Keys, Gauff-Osaka possible matchups after draw
The 2020 U.S. Open will lack a bit of star power because some tennis greats have opted out of the Grand Slam over COVID-19 concerns. But the tournament draw still reveals several potential elite clashes.

Tennis // 5 years ago
Rafael Nadal wins thriller to set up marquee final vs. Roger Federer
Rafael Nadal will face longtime rival Roger Federer in the Australian Open final after the Spaniard withstood a five-set thriller against Grigor Dimitrov 6-3, 5-7, 7-6 (5), 6-7 (4), 6-4 in the semifinals on Friday.

Sports News // 5 years ago
Nadal done for year due to wrist injury
Rafael Nadal took to social media on Thursday to announce that he will not play again in 2016 in a bid to fully recover from a left wrist injury.

Not being at the Open this year, which I'm going to pull out of, and not playing Wimbledon, I don't miss it enough to really start training, start practicing, doing everything I have to do to be where I want to be

T and Agassi missed a backhand pass wide. After he clinched the set with a backhand volley down the line, Sampras pumped his fist and shouted,

I was feeling it a little bit in the third

I think the Haas match was a tough match to get through. I played pretty well

Pete Sampras (pronounced /ˈsæmprəs/; born August 12, 1971) is a retired American tennis player and former World No. 1. During his 15-year tour career, he won 14 Grand Slam men's singles titles. A record at the time, this number was eventually surpassed by Roger Federer at Wimbledon in 2009. He had a 204–37 win-loss record over 52 Grand Slam singles tournament appearances. He is regarded as one of the greatest players of all time.

He debuted on the professional tour in 1988 and played his last top-level tournament in 2002 when he won the US Open, defeating longtime rival Andre Agassi in the final. He was the year-end World No. 1 for six consecutive years (1993–1998), a record for the open era and tied for third all-time. His seven Wimbledon singles championships is a record shared with William Renshaw. His five US Open singles titles is an open-era record shared with former World No. 1 player Jimmy Connors and former World No. 1 Roger Federer.

Pete Sampras was born in Washington, D.C., and is the third child of Sammy and Georgia Sampras. His mother immigrated from Sparta, Greece, while his father was born in the United States to a Greek immigrant father and a Jewish mother. Greek culture played a big role in his upbringing. Pete attended regular services of the Greek Orthodox Church on Sundays. From an early age, Sampras showed signs of outstanding athletic ability. At age 3 Sampras discovered a tennis racket in the basement of his home and spent hours hitting balls against the wall. In 1978, the Sampras family moved to Palos Verdes, California, and the warmer climate there allowed seven-year-old Pete to play more tennis. From early on, his great idol was Rod Laver, and at 11 Sampras met and played with him. The Sampras family joined the Jack Kramer Club, and it was here that Sampras's talent became apparent. He was spotted by Peter Fischer, a pediatrician and tennis enthusiast, who coached Sampras until 1989. Fischer was responsible for converting Sampras's double-handed backhand to single-handed with the goal of being better prepared to win Wimbledon.

FULL ARTICLE AT WIKIPEDIA.ORG
This article is licensed under the GNU Free Documentation License.
It uses material from the Wikipedia article "Pete Sampras."