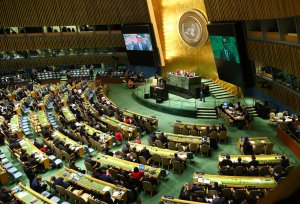 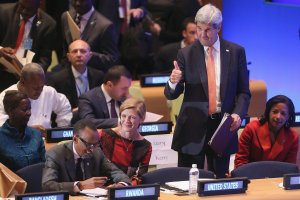 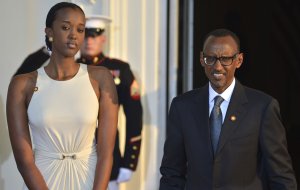 U.S. News // 3 years ago
Trump at U.N. urges isolating Iran, tossing out 'abusive' trade deals
President Donald Trump is expected to the praise progress made with North Korea while having tough words for Iranian leaders at the U.N. General Assembly.

U.S. News // 4 years ago
Trump tells African leaders he 'deeply respects' their people
President Donald Trump wrote African regional leaders in a letter he "deeply respects" their people and Secretary of State will visit the continent in March.

Jacques Chirac genuinely believes in Africa and believes in the development of Africa. The new generation of politicians (hasn't) the same contacts and will approach Africa with less emotion and more economic considerations

I am no judge. But the information and pieces of evidence that I have been able to look at appear to prove his guilt

Rwanda must respect international law and the authority of the Security Council, which is still present in the region

Sooner or later they will have to account for their actions, either before a French court or the international court

Paul Kagame (born October 23, 1957) is the current President of the Republic of Rwanda. He rose to prominence as the leader of the Rwandan Patriotic Front (RPF), whose victory over the incumbent government in July 1994 effectively ended the Rwandan genocide. Under his leadership, Rwanda has been called Africa’s “biggest success story” and Kagame has become a public advocate of new models for foreign aid designed to help recipients become self-reliant.

However, involvement in the Congo Civil War and the recent and mysterious death of opposition deputy Andre Kagwa Rwisereka has seen doubts raised over his Government's policies and motives, particularly regarding political freedom. All major parties opposed to Kagame were disqualified from participation in the 2010 presidential elections, and Kagame subsequently won with 93% of the vote.

Kagame was born to a Tutsi family in Ruhango, Rwanda in October 1957 to Deogratius and Asteria Rutagambwa. In November 1959, an increasingly restive Hutu population sparked a revolt, eventually resulting in the overthrow of Mwami Kigeri V Ndahindurwa in 1961. During the 1959 revolt and its aftermath, more than 150,000 people were killed in the fighting, with the Tutsis suffering the greatest losses. Several thousand moved to neighbouring countries including Burundi and Uganda. In all, some 20,000 Tutsis were killed. In 1960 Kagame left with his family at the age of two and moved to Uganda with many other Tutsis. In 1962 they settled in the Gahunge refugee camp, Toro, where Kagame spent the rest of his childhood years. He attended Ntare Secondary School in Uganda. During this time Kagame was a "motivated student" and bore an early fascination with revolutionaries like Che Guevara.

FULL ARTICLE AT WIKIPEDIA.ORG
This article is licensed under the GNU Free Documentation License.
It uses material from the Wikipedia article "Paul Kagame."