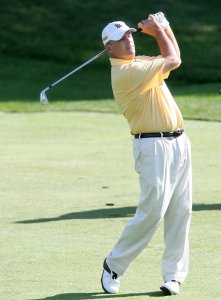 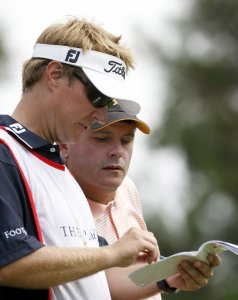 Golf // 3 years ago
This week in golf: who is playing, how to watch, full schedule
Here is this week's slate of golf action, highlighted by Jordan Spieth's quest for a Grand Slam at the 99th PGA Championship.

Golf // 3 years ago
3M Championship: Paul Goydos fires a 60, shares lead
Paul Goydos set a tournament record with a scorching 12-under-par 60 on Saturday to grab a share of the lead after two rounds of the PGA Champions Tour's 3M Championship at Blaine, Minn.

Golf // 3 years ago
Justin Thomas fires 59 in first round at Sony Open
Justin Thomas certainly didn't have a letdown after winning the SBS Tournament of Champions last weekend.

Sports News // 5 years ago
Colin Montgomerie takes early lead at ACE Group Classic
Colin Montgomerie started his week with a 6- under 66 in Friday's first round and he holds a 1-shot lead at the ACE Group Classic.
Sports News // 7 years ago
Furyk shoots 59, shares BMW Championship lead
Jim Furyk became the sixth player in PGA Tour history to shoot a 59 for 18 holes Friday, a round that put him in a share of the lead at the BMW Championship.
Sports News // 7 years ago
Bradley shoots 60 to lead Nelson
Keegan Bradley played his last three holes in 4-under Thursday and shot a course-record 60 that put him three shots in front at the Byron Nelson Championship.

I really only had one mediocre shot all day, and that was on the first hole

Paul David Goydos (born June 20, 1964) is an American professional golfer who has played on the PGA Tour and the Nationwide Tour.

Goydos was born, raised and has lived his entire life in Long Beach, California. He attended Woodrow Wilson Classical High School, Long Beach State University and turned pro in 1989. He started out as a struggling mini-tour player supplementing his income as a substitute teacher.

In 1991 and 1992, he played on the Nationwide Tour, earning one victory at the 1992 Ben Hogan Yuma Open. He earned his PGA Tour card for 1993 by going through Qualifying School.

FULL ARTICLE AT WIKIPEDIA.ORG
This article is licensed under the GNU Free Documentation License.
It uses material from the Wikipedia article "Paul Goydos."
Back to Article
/