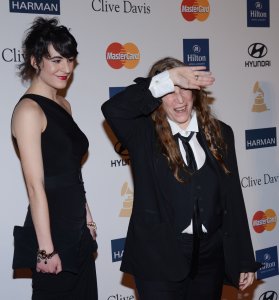 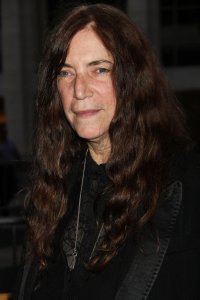 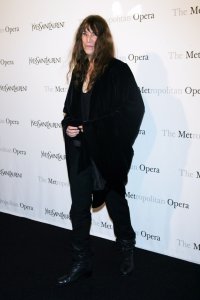 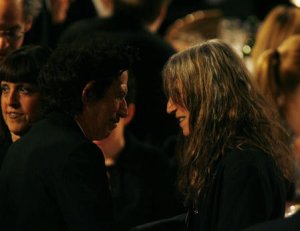 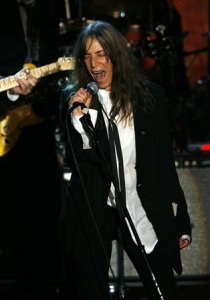 Movies // 5 months ago
Tig Notaro: Directing 'Am I OK?' with wife Stephanie Allynne 'a natural progression'
Tig Notaro and Stephanie Allynne discuss their co-directing debut, "Am I OK?," which premiered virtually at the Sundance Film Festival Monday.

Entertainment News // 2 years ago
What to stream this weekend: 'Yellow Submarine,' 'After Life' S2
A classic Beatles film, the return of "After Life " and the Beastie Boys documentary are just some of the streaming options available this weekend for viewers staying at home during the COVID-19 pandemic.

Patricia Lee "Patti" Smith (born December 30, 1946) is an American singer-songwriter, poet and visual artist, who became a highly influential component of the New York City punk rock movement with her 1975 debut album Horses. Called the "Godmother of Punk", her work was a fusion of rock and poetry. Smith's most widely known song is "Because the Night", which was co-written with Bruce Springsteen and reached number 13 on the Billboard Hot 100 chart in 1978. In 2005, Patti Smith was named a Commander of the Ordre des Arts et des Lettres by the French Minister of Culture, and in 2007, she was inducted into the Rock and Roll Hall of Fame. On November 17, 2010, she won the National Book Award for her memoir Just Kids.

Patricia Lee Smith was born in Chicago. Her mother, Beverly, was a waitress, and her father, Grant, worked at the Honeywell plant. She spent her entire childhood in Deptford Township, New Jersey, raised as a Jehovah's Witness. She had a strong religious upbringing and a Bible education, but left organized religion as a teenager because she felt it was too confining; much later, she wrote the line "Jesus died for somebody's sins, but not mine" in her cover version of Them's "Gloria" in response to this experience. Smith graduated from Deptford Township High School in 1964 and went to work in a factory.

In 1967, she left Glassboro State College (now Rowan University) and moved to New York City. She met photographer Robert Mapplethorpe there while working at a book store with a friend, poet Janet Hamill. She and Mapplethorpe had an intense romantic relationship, which was tumultuous as they dealt with times of poverty, and Mapplethorpe with his own sexuality. Smith considers Mapplethorpe to be one of the most important people in her life, and in her book Just Kids refers to him as "the artist of my life". Mapplethorpe's photographs of her became the covers for the Patti Smith Group LPs, and they remained friends until Mapplethorpe's death in 1989. In 1969 she went to Paris with her sister and started busking and doing performance art. When Smith returned to New York City, she lived in the Hotel Chelsea with Mapplethorpe; they frequented Max's Kansas City and CBGB. Smith provided the spoken word soundtrack for Sandy Daley's art film Robert Having His Nipple Pierced, starring Mapplethorpe. The same year Smith appeared with Wayne County in Jackie Curtis' play Femme Fatale. As a member of the St. Mark's Poetry Project, she spent the early 70's painting, writing, and performing. In 1971 she performed – for one night only – in Cowboy Mouth, a play that she co-wrote with Sam Shepard (The published play's notes call for "a man who looks like a coyote and a woman who looks like a crow".) She wrote several poems, "for sam shepard" and "Sam Shepard: 9 Random Years (7 + 2)" about her relationship with Shepard.

FULL ARTICLE AT WIKIPEDIA.ORG
This article is licensed under the GNU Free Documentation License.
It uses material from the Wikipedia article "Patti Smith."