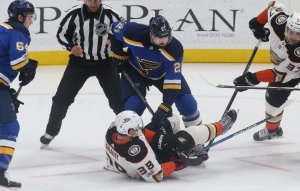 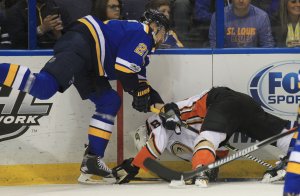 NHL // 3 years ago
Bruins look to bounce back against Sabres
The Boston Bruins are determined to extend their playoff run this season after being eliminated in the second round of the postseason last season.

NHL // 4 years ago
Los Angeles Kings beat St. Louis Blues, win fourth consecutive game
Serving as the backup goalie to Jonathan Quick, Darcy Kuemper knows he is going to get only limited opportunities to play for the Los Angeles Kings.

NHL // 4 years ago
St. Louis Blues extend unbeaten streak with win over Los Angeles Kings
Blues coach Mike Yeo has an easy way to measure the impact St. Louis left winger Jaden Schwartz is starting to have around the NHL.

In the 2005–06 season, Berglund played for VIK Västerås in the HockeyAllsvenskan, the second highest league in Sweden. He was a top prospect in the 2006 NHL Entry Draft and was drafted 25th overall by the St. Louis Blues.

He scored his first NHL goal on 13 October 2008 against Vesa Toskala of the Toronto Maple Leafs. Paired on a line (called the "Kid Line" by Blues fans, due to the oldest player on the line being 22) with David Perron and his flatmate T. J. Oshie, Berglund became a scoring threat in St. Louis' surprise 2008–09 season, finishing the year with 21 goals and 26 assists for an impressive 47 points in 76 games.

FULL ARTICLE AT WIKIPEDIA.ORG
This article is licensed under the GNU Free Documentation License.
It uses material from the Wikipedia article "Patrik Berglund."