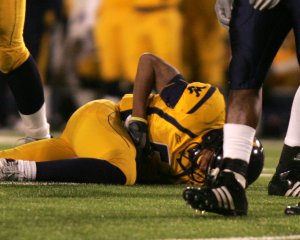 He was part of a brotherhood of Wabash men, and we grieve for him, his family, and his brothers at this difficult time

Patrick Victor Martindale White (28 May 1912 – 30 September 1990) was an Australian author who was widely regarded as a major English-language novelist of the 20th century. From 1935 until his death, he published 12 novels, two short-story collections and eight plays. His fiction freely employs shifting narrative vantage points and a stream of consciousness technique. In 1973, he was awarded the Nobel Prize in Literature.

White was born in Knightsbridge, London, to Australian parents, who settled in Sydney when he was six months old. As a child, he lived in one flat with his sister, nanny and a maid, while his parents lived in an adjoining flat. At the age of four, White developed asthma, a condition that had taken the life of his maternal grandfather. White's health was fragile throughout his childhood, which, while it precluded his participation in many childhood activities, stimulated his imagination. He would perform private rites in the garden, and would dance for his mother’s friends. He loved the theatre, which he first visited at an early age. At the age of ten, White was sent to Tudor House School, a boarding school in the New South Wales highlands, in an attempt to abate his asthma. It took him some time to adjust to the presence of other children. At boarding school he started to write plays. Even at this early age, White wrote about noticeably adult themes. In 1924, the boarding school ran into financial trouble, and the headmaster suggested that White be sent to boarding school in England, a suggestion which his parents accepted.

White struggled to adjust to his new surroundings at this new school, Cheltenham College. He was later to describe it as "a four-year prison sentence". White withdrew inside himself and had a limited circle of acquaintances. Occasionally he would holiday with his parents at European locations, but their relationship still remained distant. While in London, White did make one close friend, Ronald Waterall, an older boy who shared similar interests. White’s biographer, David Marr, wrote that the two men would walk arm in arm to London shows, stand around stage doors to catch a glimpse of their favourite stars, and give practical demonstrations of chorus girls’ high kicks, with appropriate vocal accompaniment. When Waterall left school, White again withdrew into himself. He asked his parents if he could leave school to become an actor. They compromised, allowing him to finish school early, on the condition that he first come home to Australia, to try life on the land.

FULL ARTICLE AT WIKIPEDIA.ORG
This article is licensed under the GNU Free Documentation License.
It uses material from the Wikipedia article "Patrick White."
Back to Article
/