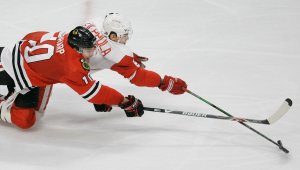 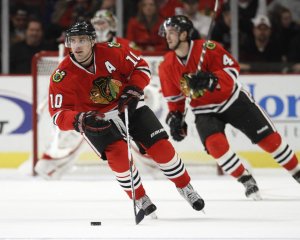 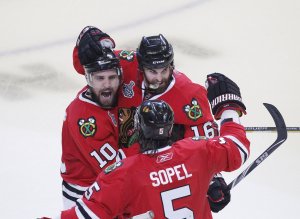 NHL // 8 months ago
Jeremy Roenick 'angry' and 'disappointed' after being fired by NBC Sports
NHL broadcaster Jeremy Roenick, who was suspended by NBC Sports in December for making inappropriate comments about his co-workers during a podcast, won't return to the network. 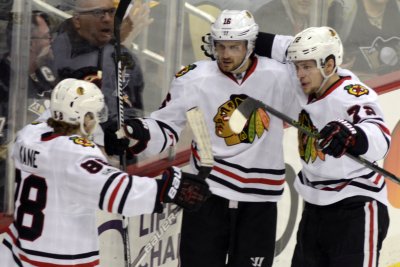 NHL // 2 years ago
Chicago Blackhawks rally past Florida Panthers in OT
The Chicago Blackhawks' quality of play isn't where Joel Quenneville would like, but when they find ways to win games like they have lately, the coach takes it as a step in the right direction.

NHL // 3 years ago
NHL roundup: recap, scores, notes for every game played on March 6
WASHINGTON -- Kari Lehtonen made a season-high 42 saves, Patrick Sharp had a goal and an assist, and the Dallas Stars held on to defeat the Capitals 4-2 on Monday night, snapping Washington's 15-game home winning streak.

Sharp was born in Winnipeg, Manitoba. He began his hockey career in Thunder Bay, Ontario, playing first for the Thunder Bay Kings program then for the former Thunder Bay Flyers of the United States Hockey League (USHL). From there he continued his hockey career in the college ranks with the University of Vermont, before the Philadelphia Flyers selected him 95th overall (3rd round) in the 2001 NHL Entry Draft.

After completing two years with Vermont, Sharp made his NHL debut in 2003–04, splitting the season between the Flyers and their American Hockey League (AHL) affiliate, the Philadelphia Phantoms, recording 7 points (5 goals, 2 assists) in 41 regular season games with the Flyers, and 29 points (15 goals, 14 assists) in 35 games for the Phantoms. Due to the 2004–05 NHL lockout, Sharp spent the entire following season in the AHL with the Phantoms, registering 23 goals and 29 assists (52 points) in 75 regular-season games and 8 goals and 13 assists (21 points) in 21 playoff games en route to a Calder Cup championship.

FULL ARTICLE AT WIKIPEDIA.ORG
This article is licensed under the GNU Free Documentation License.
It uses material from the Wikipedia article "Patrick Sharp."
Back to Article
/