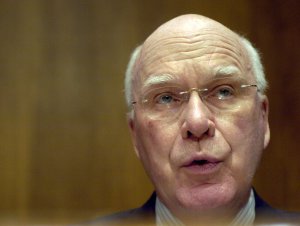 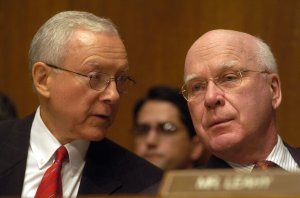 U.S. News // 4 years ago
Kaine, other senators take sides in clash over nuclear arms
Competing groups of senators are laying out arguments over how much to spend on nuclear arms.

There is significant concern about the legal advice provided by OLC (Office of Legal Counsel) while you were in charge, how that advice came to be generated . . . and the role played by the White House

I expect to get the answers. If I don't ... then I really think we should subpoena

I think we have to ask ourselves: Is it a coincidence that we are seeing such an increase in West Nile virus, or is that something that is being tested as a biological weapon against us

I agree with the president that we need a fair, impartial and independent judiciary, and it is the Senate's obligation to ensure that those standards are met

Leahy was born in Montpelier, Vermont, the son of Alba (née Zambon) and Howard Francis Leahy, a printer. His father was Irish-American and his mother Italian-American. His family roots are traced back to Irish immigrants in Montreal, Quebec and his wife's family is from Quebec. He has a brother, John, and a sister, Mary.

Leahy graduated from Saint Michael's College in 1961 and received his J.D. degree from Georgetown University Law Center in 1964. He practiced as a lawyer until he was elected for four terms as State's Attorney of Chittenden County from 1966 to 1974. Leahy was elected to the United States Senate for the first time in 1974 (at 34, he was the youngest U.S. Senator ever to be elected by Vermont). Leahy was the first Democrat elected to the Senate from Vermont and remains the only Democrat to have been elected Senator from Vermont. He was also the first non-Republican Senator from Vermont since 1856.

FULL ARTICLE AT WIKIPEDIA.ORG
This article is licensed under the GNU Free Documentation License.
It uses material from the Wikipedia article "Patrick J. Leahy."
Back to Article
/