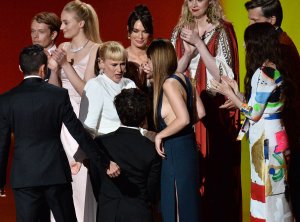 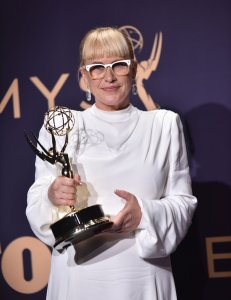 TV // 1 month ago
'Succession,' 'Ted Lasso,' 'White Lotus' lead the field in Emmy nominations
"Succession," "Euphoria," "Ozark" and "Only Murders in the Building" were among the TV shows with multiple Emmy nominations announced Tuesday morning in Los Angeles.

TV // 3 months ago
Joey King: 5 roles beyond 'The In Between'
"The In Between" star Joey King can also be seen in "The Kissing Booth," "Fargo" Season 1 and other TV series and films.

TV // 6 months ago
What to watch: 5 documentaries like 'Tinder Swindler'
Millions of people have tuned in to watch Netflix's scintillating true-crime film, "The Tinder Swindler," putting it in the streaming service's Top 10 list in 92 countries this month. Here are five similar documentaries.

Patricia T. Arquette (born April 8, 1968) is an American actress and director. She played the lead character in the supernatural drama series Medium.

Arquette was born in Chicago, Illinois, the daughter of Lewis Arquette, an actor, and Brenda "Mardi" Olivia (née Nowak), an actress, poet, theater operator, activist, acting teacher and therapist. Arquette's mother was Jewish, the daughter of a Holocaust refugee from Poland, and Arquette's father was a convert to Islam and a descendant of explorer Meriwether Lewis. Her paternal grandfather was comedian Cliff Arquette, and her siblings are actors Rosanna, Alexis, Richmond and David Arquette.

Arquette was raised in Virginia and California.

FULL ARTICLE AT WIKIPEDIA.ORG
This article is licensed under the GNU Free Documentation License.
It uses material from the Wikipedia article "Patricia Arquette."