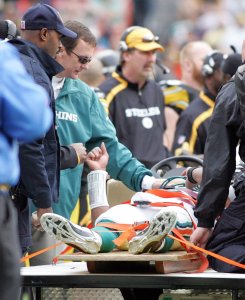 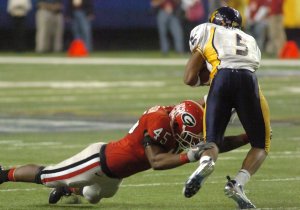 Patrick "Pat" White (born February 25, 1986 in Daphne, Alabama) is an American football quarterback for the Miami Dolphins of the National Football League. He was drafted by the Dolphins in the second round of the 2009 NFL Draft. He played college football at West Virginia.

White was voted 3rd in the Mr. Football for Alabama his senior high school season. His senior season he rushed for 1,905 yards and 31 touchdowns at Daphne High. He also passed for 1,488 yards and 15 touchdowns. He became a class 6-A All-State first string for football, but played pitcher and outfield in baseball as well, winning two state championships.

White was being pursued by West Virginia University, Auburn, University of Kentucky, LSU, Mississippi State, and Vanderbilt. However, former West Virginia head coach Rich Rodriguez and offensive line coach Rick Trickett promised White a chance to play quarterback in college, and he eventually signed his letter of intent to WVU.

FULL ARTICLE AT WIKIPEDIA.ORG
This article is licensed under the GNU Free Documentation License.
It uses material from the Wikipedia article "Pat White."