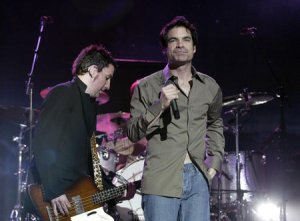 Music // 2 years ago
Taylor Swift has an affair in Sugarland music video tease
Taylor Swift is seen getting close to "Legends of Tomorrow" star Brandon Routh in a teaser trailer for Sugarland's upcoming music video for "Babe."

We're quite honored to be included in this great inaugural parade

We're quite honored to be included in this great inaugural parade

I feel like we've established ourselves as a career band, and we'll continue to do that

Birds of a Feather -- A Tribute to Charlie Parker

Pat released his first solo album, Last of Seven, on September 18, 2007, followed by a nation-wide tour. He followed the tour up with a small, intimate acoustic tour, which inspired his "Last of Seven Acoustic," available via digital download only.

His first solo single, "Her Eyes", was released to radio stations in July and made the top 10 of Billboard's Hot AC chart. His second single is "Two Ways to Say Goodbye."

FULL ARTICLE AT WIKIPEDIA.ORG
This article is licensed under the GNU Free Documentation License.
It uses material from the Wikipedia article "Pat Monahan."
Back to Article
/