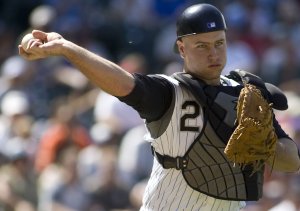 Misch was born in Northbrook, Illinois. He is a graduate of Glenbrook North High School in Northbrook and was twice named to the All-Mid-American Conference Second Team while attending Western Michigan University.

FULL ARTICLE AT WIKIPEDIA.ORG
This article is licensed under the GNU Free Documentation License.
It uses material from the Wikipedia article "Pat Misch."
Back to Article
/