College Football // 2 years ago
Holiday Bowl: No. 17 Utah takes on No. 22 Northwestern
The San Diego Credit Union Holiday Bowl matchup between Northwestern and Utah on New Year's Eve can be recognized as the Rose Bowl Alternative Bowl.

College Football // 2 years ago
No. 6 Buckeyes heavy favorites against No. 21 Wildcats
COLUMBUS, Ohio -- A month ago, Ohio State and Northwestern seemed unlikely candidates to reach the Big Ten Championship Game.

College Football // 3 years ago
2017 Music City Bowl: Northwestern survives Kentucky
The 20th Music City Bowl might have been the wildest of them all. 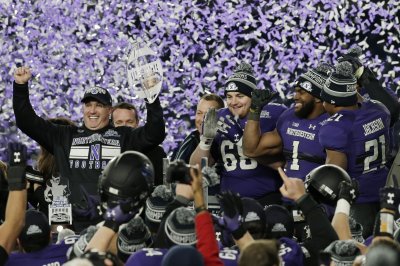 College Football // 3 years ago
Northwestern extends contact of football coach Pat Fitzgerald through 2026
Pat Fitzgerald already has been spent 11 seasons as Northwestern coach and he could potentially coach the Wildcats for at least another decade after signing an extension through the 2026 season.

I'm humbled and appreciative of the commitment shown by Northwestern

Pat Fitzgerald (born December 2, 1974(1974-12-02)) is the current head coach of the Northwestern University Wildcats football team. He was selected after the unexpected death of Randy Walker and announced at a press conference on July 7, 2006. He was 31 at the time of his appointment, making him the youngest coach in the Big Ten Conference and in NCAA Division I-A football by five years. With Lane Kiffin's hiring at the University of Tennessee on December 1, 2008, Fitzgerald lost his status as the youngest coach by about six months.

Fitzgerald starred at linebacker for the Wildcats in the mid-1990s, helping to lead the team to a 10–1 regular season record in 1995 and a berth in the 1996 Rose Bowl, the school's first appearance there since 1949. Fitzgerald was unable to play in the game, however, after breaking his leg in the next-to-last game of the 1995 season against Iowa. Fitzgerald returned for the 1996 season, leading the Wildcats to the 1997 Citrus Bowl.

In his playing career, he twice was named Big Ten Defensive Player of the Year and won both the Bronko Nagurski Trophy and the Chuck Bednarik Award in 1995 and again in 1996, becoming the first two-time winner of both honors.

FULL ARTICLE AT WIKIPEDIA.ORG
This article is licensed under the GNU Free Documentation License.
It uses material from the Wikipedia article "Pat Fitzgerald."
Back to Article
/