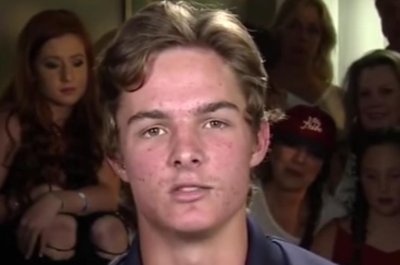 Patrick Brian "Pat" Burrell (born October 10, 1976, in Eureka Springs, Arkansas), nicknamed "Pat the Bat" is a Major League Baseball outfielder who is currently with the San Francisco Giants. Previously, he has played for the Philadelphia Phillies and the Tampa Bay Rays. He bats and throws right-handed.

Burrell attended San Lorenzo Valley High School in Felton, California, as a freshman. After his freshman year, he transferred to Bellarmine College Preparatory in San Jose, where he played baseball and football. In the football program, playing quarterback, Burrell competed against Tom Brady (now the quarterback for the New England Patriots), who played for rival Junipero Serra High School in San Mateo, California. He decided to concentrate on baseball in his senior year, however, and he was named the California Coaches Association Player of the Year after he batted .369 with eleven home runs.

After graduating from high school in 1995, Burrell attended the University of Miami, where he played third base and was a teammate of current Giants' first baseman Aubrey Huff. As a freshman, he was selected as a First-Team All-American by Baseball America and the Collegiate Baseball Newspaper. He was also named the Most Outstanding Player of the 1996 College World Series, joining Dave Winfield and Phil Nevin as the only players to win the award without winning the series. In his sophomore year, he was again named a First-Team All-American by Baseball America and the Collegiate Baseball Newspaper but also by the Sporting News this year. Also, he was named Baseball America's Summer Player of the year in 1997. In 1998, as a junior, he won the Golden Spikes Award as the best player in college baseball. That year, he was drafted by the Philadelphia Phillies with the first overall pick in the 1998 Major League Baseball Draft. Burrell finished his college career with sixty-one home runs, 187 runs batted in (RBI), and 170 walks in 162 games. His .442 batting average was seventh all-time by an NCAA player, and his slugging percentage of .888 was second only to Pete Incaviglia. In February 2008, Burrell was inducted into the University of Miami Sports Hall of Fame.

FULL ARTICLE AT WIKIPEDIA.ORG
This article is licensed under the GNU Free Documentation License.
It uses material from the Wikipedia article "Pat Burrell."
Back to Article
/