Odd News // 1 year ago
Oscar Meyer seeking new 'hotdogger' to travel in Wienermobile
Oscar Meyer announced it is seeking a new "hotdogger" to be in charge of taking the iconic Wienermobile across the country to promote the brand.

Odd News // 5 years ago
Analysis: Some hot dog brands contain human DNA
A California food analysis startup announced some hard news about one of the most beloved foods in the United States: 2 percent of hot dogs contain human DNA. 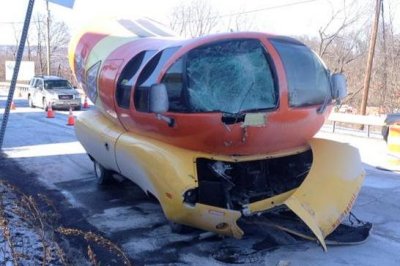 German immigrant Oscar F. Mayer (March 29, 1859 in Neresheim - March 11, 1955) began working at a meat market in Detroit, Michigan, and later in Chicago, Illinois. In 1900 in Chicago, Oscar Mayer, along with his brother Gottfried, leased the Kolling Meat Market. The two sold bratwurst, liverwurst, and weißwurst and were popular in the predominantly German neighborhoods of Chicago around the market.

As the meat market's popularity grew, it expanded its storefront and sponsored local events including the Chicago World's Fair in 1893. By 1900 the company had 43 employees and Chicago-wide delivery service. In 1904 Oscar Mayer began branding its meats to capitalize on their popularity, beginning an industry-wide trend. In 1906 Oscar Mayer became one of the first companies to voluntarily submit to the newly-created Food Safety Inspection Service (part of the United States Department of Agriculture) for testing the purity of their products.

FULL ARTICLE AT WIKIPEDIA.ORG
This article is licensed under the GNU Free Documentation License.
It uses material from the Wikipedia article "Oscar Mayer."
Back to Article
/