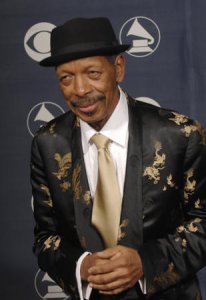 Ornette Coleman (born March 9, 1930) is an American saxophonist, violinist, trumpeter and composer. He was one of the major innovators of the free jazz movement of the 1950s and 1960s.

Coleman was born and raised in Fort Worth, Texas, where he began performing R&B and bebop initially on tenor saxophone. Seeking a way to work his way out of his home town, he took a job in 1949 with a Silas Green from New Orleans traveling show and then with touring rhythm and blues shows. After a show in Baton Rouge, he was assaulted and his saxophone was destroyed.

FULL ARTICLE AT WIKIPEDIA.ORG
This article is licensed under the GNU Free Documentation License.
It uses material from the Wikipedia article "Ornette Coleman."
Back to Article
/