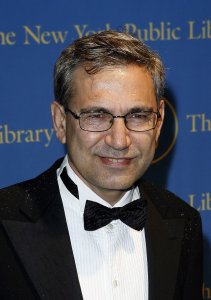 One million Armenians and 30,000 Kurds were killed in these lands and nobody but me dares talk about it

One million Armenians and 30,000 Kurds were killed in these lands and nobody but me dares talk about it

There is nothing that constitutes a crime in this interview

Ferit Orhan Pamuk (born 7 June 1952), generally known simply as Orhan Pamuk, is a Turkish novelist. He is also the Robert Yik-Fong Tam Professor in the Humanities at Columbia University, where he teaches comparative literature and writing.

One of Turkey's most prominent novelists, his work has sold over seven million books in more than fifty languages, making him the country's best-selling writer. Pamuk is the recipient of numerous literary awards, including the Nobel Prize in Literature 2006—the first Nobel Prize to be awarded to a Turkish citizen.

Pamuk was born in Istanbul in 1952 and grew up in a wealthy yet declining bourgeois family; an experience he describes in passing in his novels The Black Book and Cevdet Bey and His Sons, as well as more thoroughly in his personal memoir Istanbul. He was educated at Robert College secondary school in Istanbul and went on to study architecture at the Istanbul Technical University since it was related to his real dream career, painting. He left the architecture school after three years, however, to become a full-time writer, and graduated from the Institute of Journalism at the University of Istanbul in 1976. From ages 22 to 30, Pamuk lived with his mother, writing his first novel and attempting to find a publisher. He describes himself as a Cultural Muslim who associates the historical and cultural identification with the religion while not believing in a personal connection to God.

FULL ARTICLE AT WIKIPEDIA.ORG
This article is licensed under the GNU Free Documentation License.
It uses material from the Wikipedia article "Orhan Pamuk."
Back to Article
/