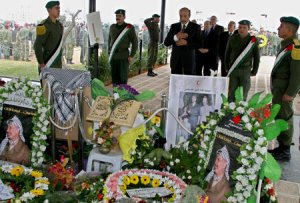 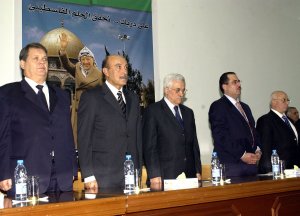 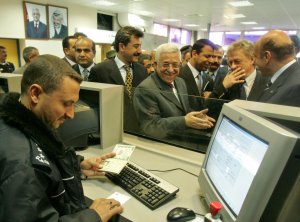 World News // 1 month ago
Islamic holy month of Ramadan begins in post-coronavirus world
The start of the Islamic holiday depends on where faithful are located, as it officially begins with the sighting of the first crescent of a new moon, which will occur at different times around the world Thursday.

I want the opposition to understand that, in this limited time, we can do what President Mubarak has said he would and we cannot do more

If President Mubarak would say that 'I'm leaving now,' then who would take over

Sooner or later this has to move to a negotiating phase from a demonstration phase. It has got to move off the television screens and into the back room, so to speak

I have not been invited to take part in the negotiation

Omar Suleiman (Arabic: عمر سليمان‎, Egyptian Arabic pronunciation: ; born 2 July 1936) is a former Egyptian army general, politician, diplomat, and intelligence officer. A leading figure in Egypt's intelligence system since 1986, Suleiman was appointed to the long-vacant Vice Presidency by then-President Hosni Mubarak on 29 January 2011. On 11 February 2011, Suleiman announced Mubarak's resignation and ceased being Vice President; governing power was transferred to the Armed Forces Supreme Council, of which Suleiman is not a member. A new head of intelligent services was appointed by the ruling Supreme Council. Suleiman withdrew from the political scene and did not appear in public after announcing Mubarak's resignation.

Millions of Egyptian citizens involved in the Egyptian Revolution of 2011 opposed Suleiman or Mubarak remaining in power without elections taking place. Human rights groups tied Suleiman’s career to a regime marked by widespread human rights abuses, and asserted that many Egyptians "see Suleiman as Mubarak II." Torture victims and human rights groups charged that Suleiman oversaw the systematic use of torture on detainees and that in at least one instance he personally tortured a detainee during his career in intelligence. In response to the 2011 protests, Suleiman blamed foreign influence and appealed to protestors to go home.

Suleiman was born in Qena in Upper Egypt. In 1954 at the age of 19, he moved to Cairo to enroll in Egypt's prestigious Military Academy. He received additional military training in the Soviet Union at Moscow's Frunze Military Academy. He participated in both the Six-Day and October wars. In the mid-1980's, Suleiman earned additional degrees, including a bachelor's degree from Ain Shams University and a master's degree from Cairo University, both in political science. A fluent English speaker, Suleiman was transferred to military intelligence, where he worked on Egypt-United States relations.

FULL ARTICLE AT WIKIPEDIA.ORG
This article is licensed under the GNU Free Documentation License.
It uses material from the Wikipedia article "Omar Suleiman."
Back to Article
/