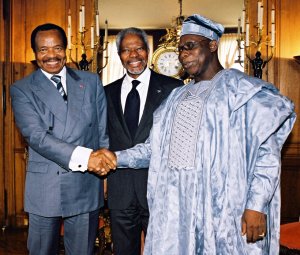 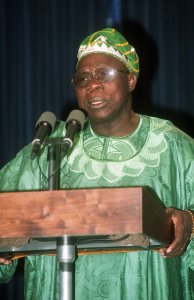 Voices // 1 year ago
Anti-Christian attacks in Nigeria threaten precarious balance of faiths
Over the weekend, Chidinma Ibeleji, a deaconess in the Redeemed Christian Church of God in Nigeria, was kidnapped along with four others on her way to her Pentecostal denomination's annual convention in Lagos.

Top News // 3 years ago
The Almanac
On Feb. 27, 1933, it was announced that President-elect Franklin Delano Roosevelt would use a 263-year-old tattered Dutch Bible that had been in the possession of his family since 1670 for his inauguration on March 4.

Rapid and faithful implementation is key to success, and (we) urged them to fully implement the agreements, in accordance with their stated commitments and agreed timetable

As an elder statesman, he should be advising government in private

No matter how high one rises, one can never be too big, too high or too old to learn

Oluṣẹgun Mathew Okikiọla Arẹmu Ọbasanjọ, GCFR (pronounced in Yoruba, /oʊˈbɑːsəndʒoʊ/ in English; born circa 5 March 1937) is a former Nigerian Army general and former President of Nigeria. A Nigerian of Yoruba descent, Obasanjo was a career soldier before serving twice as his nation's head of state, once as a military ruler, between 13 February 1976 to 1 October 1979 and again from 29 May 1999 to 29 May 2007, as elected President. His current home is Abeokuta, the Capital City of Ogun State, where he is a nobleman and holder of the titles of the Balogun of the Owu Lineage and the Ekerin Balogun of the Egba clan of Yorubaland.

Ọbasanjọ was born in Ogun State, grew up in Owu (Abeokuta), and he enlisted in the Nigerian Army in 1958. His first name, Olusegun, means "The Lord is victorious". He trained at Aldershot, and was then commissioned as an officer in the Nigerian Army. He served at 1 Area Command in Kaduna and then became Chief Army Engineer, then commander of 2 Area Command from July 1967, which was redesignated 2 Division Rear, and then the Ibadan Garrison Organisation. He was also trained in DSSC, Wellington. During the Nigerian Civil War, he commanded the Army's 3 Marine Commando Division that took Owerri, effectively bringing an end to the civil war. Gbenga

Although Brig. Ọbasanjọ did not directly participate in the military coup of 29 July 1975, led by Murtala Mohammed, he supported it and was named Murtala's deputy in the new government. As chief of staff of Supreme Headquarters, Obasanjo sought advice from Rogerlay of Akobi and thus had the support of the military. On 13 February 1976, he was marked for assassination along with Murtala and other senior military personnel by coup plotters, lead by Army Col. Dimka. Although Murtala was killed during the attempted coup, Obasanjo escaped death as another officer's vehicle was mistaken for his. The low profile security policy adopted by Murtala in guarding very important persons allowed the plotters easy access to their targets. The coup was foiled because the plotters missed Obasanjo and General Theophilus Danjuma, chief of army staff and de facto number three man in the country. The plotters also failed to monopolize communications, although they were able to take over the radio station to announce the coup attempt. Obasanjo and Danjuma were able to establish a chain of command and re-established security in Lagos, thereby regaining control. Obasanjo was made head of state in a meeting of the Supreme Military Council. Keeping the chain of command established by Murtala Muhammad in place, Obasanjo pledged to continue the programme for the restoration of civilian government in 1979 and to carry forward the reform programme to improve the quality of public service.

FULL ARTICLE AT WIKIPEDIA.ORG
This article is licensed under the GNU Free Documentation License.
It uses material from the Wikipedia article "Olusegun Obasanjo."
Back to Article
/