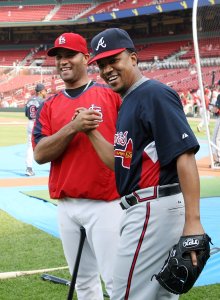 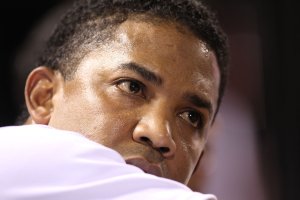 MLB // 2 years ago
Oakland A's turn to well-traveled Edwin Jackson to start against Detroit Tigers
Edwin Jackson has pitched for a lot of teams. The Oakland A's have burned through many starting pitchers this season.

I don't think I'd be a good pitcher throwing with pain

Dotel graduated from Liceo Cansino Afuera High School in the Dominican Republic and was signed by the New York Mets as an amateur free agent in 1993. He played for their minor league affiliate in the Dominican League through 1994 and then promoted through the Mets' minor league system for the next several seasons.

Dotel made his major league debut on June 26, 1999 for the New York Mets and lost. His first MLB win came July 1, 1999 against the Florida Marlins. He ended the season as the winning pitcher in the 1999 National League Championship Series game five against the Atlanta Braves.

FULL ARTICLE AT WIKIPEDIA.ORG
This article is licensed under the GNU Free Documentation License.
It uses material from the Wikipedia article "Octavio Dotel."
Back to Article
/