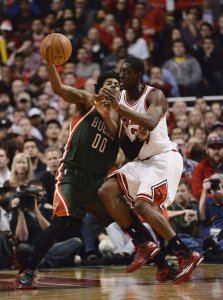 Sports News // 6 years ago
Suddenly healthy Miami Heat burn Milwaukee Bucks
It's been a long, long few weeks for the Miami Heat, who have been finding ways to stay afloat without point guard Goran Dragic and forward Josh McRoberts.

Sports News // 6 years ago
Golden State Warriors' record winning streak over with loss to Milwaukee Bucks
MILWAUKEE -- The streak is over.

Sports News // 6 years ago
Spurs get everyone involved in 95-70 win
SAN ANTONIO -- San Antonio Spurs coach Gregg Popovich had a pregame plan to limit playing time for his starters on Wednesday night.

Sports News // 6 years ago
Bucks pull out double-overtime win over Cavaliers
MILWAUKEE -- Saturday night, the Milwaukee Bucks were as close to full strength as they've been all season and it turned out, they'd need every bit of it.

I'm extremely disappointed that I'm going to miss the next 10 games, particularly as our club is making a push for the playoffs

Ovinton J'Anthony "O. J." Mayo (born November 5, 1987 in Huntington, West Virginia), is an American basketball player currently playing with the Memphis Grizzlies of the NBA. He signed with the team on July 8, 2008. He played college basketball for the University of Southern California (USC). As an athlete at Huntington High School and North College Hill High School in Cincinnati, he was considered by several media outlets to be the best high school basketball player in the United States.

He chose to enter the 2008 NBA Draft instead of completing his three remaining years of college eligibility; when he chose Bill Duffy and Associates as his agency, he lost his NCAA eligibility. He was taken third overall by the Minnesota Timberwolves on June 26, 2008. Following the draft, Minnesota traded him and three other players to the Grizzlies in exchange for Kevin Love and three players.

Mayo was a part of the 2008 U.S. Select Team to help get the Olympic team ready for the 2008 Summer Olympics in Beijing.

FULL ARTICLE AT WIKIPEDIA.ORG
This article is licensed under the GNU Free Documentation License.
It uses material from the Wikipedia article "O.J. Mayo."