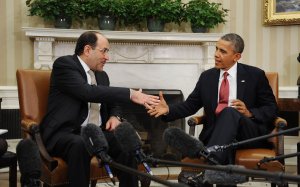 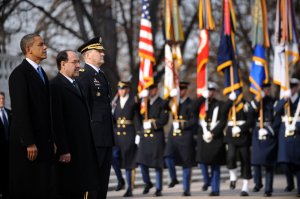 Voices // 1 month ago
Iran seeks to add Beirut to list of capitals it controls
Ayatollah Ali Khamenei, the supreme leader of the Islamic Republic of Iran, has made no secret of his wish to dominate the Middle East. Current target: Lebanon.

Voices // 2 years ago
Iraqi protesters lose their fear
Mass protests in Iraq are continuing despite a vicious crackdown that has left 231 people dead, many of them shot by snipers and gunmen from the Hashd-al-Shaabi militia.

Voices // 2 years ago
Ex-President Obama's timidity hampered foreign policy
Barack Obama could have been an exceptional president. He missed the chance because of his timidity, especially in the realm of foreign policy.

But this is not the aspiration of the people, the army, the police, the establishments or the national parties

With oil revenues generating more than 95 percent of the government's resources, these claims could affect reconstruction and economic transformation taking place in Iraq and consequently constitute a grave threat to Iraq's stability and security, and therefore to international peace and security

Nouri Kamil Mohammed Hasan al-Maliki (Arabic: نوري كامل محمّد حسن المالكي‎ Nūrī Kāmil al-Mālikī; born June 20, 1950), also known as Jawad al-Maliki or Abu Esraa, is the Prime Minister of Iraq and the secretary-general of the Islamic Dawa Party. Al-Maliki and his government succeeded the Iraqi Transitional Government. He is currently in his second term as Prime Minister. His first Cabinet was approved by the National Assembly and sworn in on May 20, 2006; his second Cabinet, in which he also holds the positions of acting Interior Minister, acting Defense Minister, and acting National Security Minister, was approved on December 21, 2010.

Al-Maliki began his political career as a Shia dissident under Saddam Hussein's administration in the late 1970s and rose to prominence after he fled a death sentence into exile for 24 years. During his time abroad, he became a senior leader of Dawa, coordinated the activities of anti-Saddam guerillas and built relationships with Iranian and Syrian officials whose help he sought in overthrowing Saddam.

Al-Maliki was born in Janaja village in Abu Gharaq, a central Iraqi town situated between Karbala and Al Hillah. He is a member of the Al-Ali Tribe, an offshoot of the Bani Malik tribe. He attended school in Al Hindiyah (Hindiya). Al-Maliki received a bachelor's degree at Usul al-Din College in Baghdad, and a master's degree in Arabic literature from Baghdad University. Al-Maliki lived for a time in Al Hillah, where he worked in the education department. He joined the Islamic Dawa Party in the late 1960s while studying at university. His grandfather, Muhammad Hasan Abi al-Mahasin, was a poet and cleric who was the president of the Revolutionary Council (Al-Majlis Al-Milli) of the Iraqi revolution against the British in 1920, and served as Iraq's Minister of Education under King Faisal I.

FULL ARTICLE AT WIKIPEDIA.ORG
This article is licensed under the GNU Free Documentation License.
It uses material from the Wikipedia article "Nouri al-Maliki."