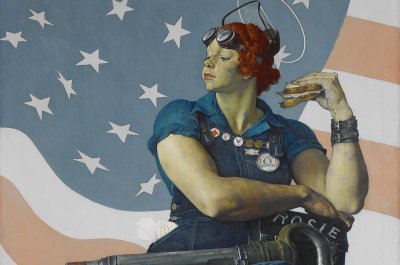 Norman Percevel Rockwell (February 3, 1894 – November 8, 1978) was a 20th-century American painter and illustrator. His works enjoy a broad popular appeal in the United States, where Rockwell is most famous for the cover illustrations of everyday life scenarios he created for The Saturday Evening Post magazine for more than four decades. Among the best-known of Rockwell's works are the Willie Gillis series, Rosie the Riveter (although his Rosie was reproduced less than others of the day), Saying Grace (1951), and the Four Freedoms series. He is also noted for his work for the Boy Scouts of America (BSA); producing covers for their publication Boys' Life, calendars, and other illustrations.

Norman Rockwell was born on February 3, 1894, in New York City to Jarvis Waring Rockwell and Anne Mary "Nancy" (née Hill) Rockwell. His earliest American ancestor was John Rockwell (1588 - 1662), from Somerset, England, who immigrated to America probably in 1635 aboard the ship Hopewell and became one of the first settlers of Windsor, Connecticut. He had one brother, Jarvis Waring Rockwell, Jr., older by a year and half. Jarvis Waring, Sr., was the manager of the New York office of a Philadelphia textile firm, George Wood, Sons & Company, where he spent his entire career.

Norman transferred from high school to the Chase Art School at the age of 14. He then went on to the National Academy of Design and finally to the Art Students League. There, he was taught by Thomas Fogarty, George Bridgman, and Frank Vincent DuMond; his early works were produced for St. Nicholas Magazine, the Boy Scouts of America (BSA) publication Boys' Life and other juvenile publications. Joseph Csatari carried on his legacy and style for the BSA.

FULL ARTICLE AT WIKIPEDIA.ORG
This article is licensed under the GNU Free Documentation License.
It uses material from the Wikipedia article "Norman Rockwell."
Back to Article
/