Soccer // 2 years ago
Will Ferrell channels Ron Burgundy as MLS commentator
Will Ferrell sat down with an ESPN broadcast crew, acting as "Anchorman" character Ron Burgundy, during the Seattle Sounders and Los Angeles FC game. 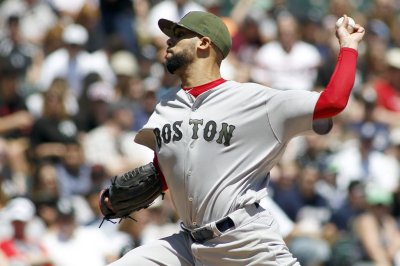 I'm not going to have the surgery to repair the tendon

It's a tremendous accomplishment. His peers and everybody respects him totally. I was clapping just like everybody else was. He's great. He may not get the fanfare or whatever, but he definitely gets the respect and appreciation from all of his peers. To get that respect is ultimately what it's all about

From the first day I had the thrill of putting on a Red Sox uniform and playing in front of all the great fans at Fenway Park, I have felt at home in Boston

Anthony Nomar Garciaparra (pronounced /ˈnoʊmɑr ɡɑrˌsiːəˈpɑrə/; born July 23, 1973, in Whittier, California) is an American Major League Baseball player for the Oakland Athletics. He previously played first base and third base for the Los Angeles Dodgers, and shortstop and third base for the Chicago Cubs, after a decade as an All-Star shortstop for the Boston Red Sox. He is one of 13 players in Major League history to hit two grand slams during a single game, and the only player to achieve the feat at home.

FULL ARTICLE AT WIKIPEDIA.ORG
This article is licensed under the GNU Free Documentation License.
It uses material from the Wikipedia article "Nomar Garciaparra."
Back to Article
/