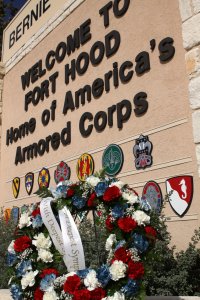 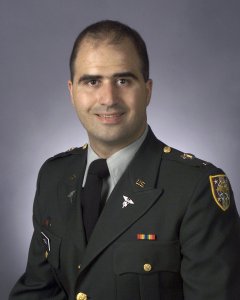 Ticking Time Bomb: Fort Hood massacre could have been prevented

Major Nidal Malik Hasan, USA (born September 8, 1970) is an American Army officer who is the sole suspect in the November 5, 2009, Fort Hood shooting, which occurred less than a month before he would have deployed to Afghanistan.

Born in Virginia to parents who had moved to the U.S. from a Palestinian town near Jerusalem, Hasan joined the Army while in college and became a psychiatrist at Fort Hood, Texas. Prior to the shooting, he had expressed extremist views which had been brought to the attention of his superiors and the FBI. Hasan was discovered to have exchanged e-mails with Imam Anwar al-Awlaki asking for spiritual guidance regarding violence. Awlaki has since been linked to other attacks by radicalized Muslims, and he quickly blessed the Fort Hood operation because it was against a military target. Al Qaeda spokesman Adam Gadahn also praised the "Mujahid brother" as a "pioneer, a trailblazer and a role-model." The attack was described by a Senate report as "the worst terrorist attack on U.S. soil since September 11, 2001.". General Jack Keane testified that the military "failed to deal with radicalization" as Hasan's "open displays of violent Islamist extremism was a violation of military rules" and should have been discharged.

However investigators in the FBI and U.S. Army determined that Hasan acted alone and as of yet have found no evidence of links to terrorist groups. They are satisfied that his communications with Awlaki, targeted in 2010 as a dangerous Al Queda leader, posed no threat at the time. Attorney General Eric Holder has declined to state that radical Islam was the major motive for Hasan's attack. A Rasmussen poll found that 60 percent of likely American voters believed that the shootings should have been investigated by military authorities as a terrorist act. Nevertheless, Hasan was not charged with terrorism and it was widely debated as to whether Hasan could be called a "terrorist". One terrorism analyst believed Hasan was "acting individually because he doesn't want to deploy overseas". Hasan has been charged with 13 counts of premeditated murder and 32 counts of attempted murder. The hearing, which determined whether Hasan would be fit to stand trial at court martial, began on 12 October 2010.

FULL ARTICLE AT WIKIPEDIA.ORG
This article is licensed under the GNU Free Documentation License.
It uses material from the Wikipedia article "Nidal Malik Hasan."
Back to Article
/