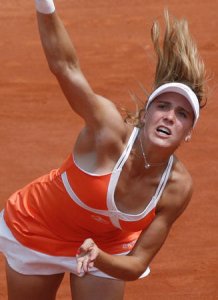 Sports News // 5 years ago
Serena sneaks into quarters; Sharapova, Kvitova ousted at the French
Serena Williams survived her fourth-round match against fellow American Sloane Stephens, while defending champion Maria Sharapova and fourth-seeded Petra Kvitova were not as fortunate Monday at the French Open.

Vaidišová has been playing tennis since she was six years old. She is a student of Nick Bollettieri and trains at the Nick Bollettieri Tennis Academy in Bradenton, Florida. Her serve is considered her biggest weapon. On 9 August 2006, at the age of 17 years, three months, and two weeks, she became the 12th-youngest player in WTA Tour history to be ranked in the top 10. She achieved a career-high ranking of World No. 7 on 14 May 2007. As of December 22, 2009 Vaidišová is ranked World No. 187.

As of March 2009, she was coached by her stepfather, Ales Kodat, who replaced David Felgate. By the end of 2009, she hired top coach Eric van Harpen.

FULL ARTICLE AT WIKIPEDIA.ORG
This article is licensed under the GNU Free Documentation License.
It uses material from the Wikipedia article "Nicole Vaidisova."
Back to Article
/