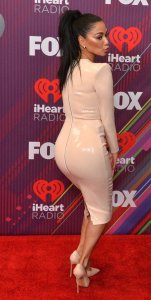 TV // 6 months ago
Faith Evans gets the boot on 'Masked Singer'
Recording artist Faith Evans was eliminated from Season 6 of Fox's "The Masked Singer" Wednesday night.

Previously, Scherzinger was a backing vocalist for the late-1990s rock group Days of the New, then she was part of reality TV girl group Eden's Crush. After the disbandment of the group, she joined the Pussycat Dolls and became the group's lead vocalist during their transition into a career in music. With the Pussycat Dolls, she released two albums PCD and Doll Domination and embarked on several concert tours. After leaving the group in December 2010, Scherzinger began a solo career with the release of her debut studio album Killer Love. The album's second single, "Don't Hold Your Breath" peaked at number one on the UK Singles Chart, in turn marking her first number one hit as a solo artist.

Scherzinger became the winner of the tenth season of Dancing with the Stars in early 2010. She will judge the American version of The X Factor which will air in fall 2011.

FULL ARTICLE AT WIKIPEDIA.ORG
This article is licensed under the GNU Free Documentation License.
It uses material from the Wikipedia article "Nicole Scherzinger."