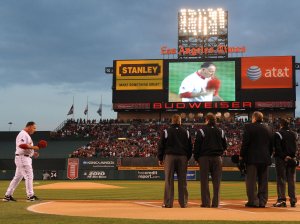 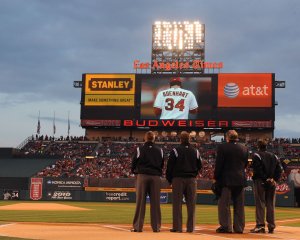 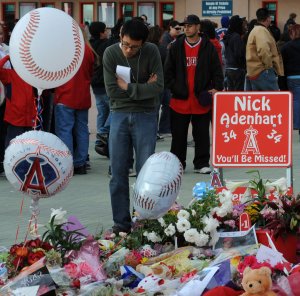 A graduate of Williamsport High School, Adenhart was highly touted as a high school prospect until an injury in his final game required Tommy John surgery. He was drafted by the Angels in the 14th round of the 2004 Major League Baseball Draft, and began playing in their minor league system after the surgery was a success. He spent three full years in the minor leagues before making his major league debut on May 1, 2008. After appearing in three games, Adenhart spent the rest of 2008 in the minor leagues developing his skills, and in 2009 he earned a spot in the Angels' starting rotation.

Just after pitching his first start of 2009, Adenhart was killed in a car accident by a drunk driver. Both the Angels and the Salt Lake Bees, for whom Adenhart played in 2008, suspended their next games. There were many tributes to him over the course of the season, including his former teammates spraying champagne and beer on one of his jerseys after they clinched the 2009 American League West division championship.

FULL ARTICLE AT WIKIPEDIA.ORG
This article is licensed under the GNU Free Documentation License.
It uses material from the Wikipedia article "Nick Adenhart."
Back to Article
/