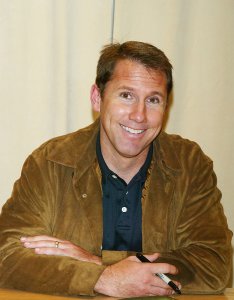 Entertainment News // 2 years ago
Shane West says he spoke to Mandy Moore about 'This is Us' guest spot
Shane West said he's "100 percent interested" in reuniting with his "A Walk to Remember" co-star Mandy Moore on "This is Us."

Entertainment News // 3 years ago
'The Notebook' to be adapted as Broadway musical
Ingrid Michaelson is working with "This is Us" producer Bekah Brunstetter on a new version of Nicholas Sparks' novel "The Notebook."

Top News // 3 years ago
The Almanac
On Dec. 31, 1968, the Soviet Union tested its supersonic airliner, the TU-144, months before the Anglo-French Concorde.

Nicholas Charles Sparks (born December 31, 1965) is an internationally-bestselling American novelist and screenwriter. He has 16 published novels, with themes that include Christian faith, love, tragedy and fate. Six have been adapted to film, including Message in a Bottle, A Walk to Remember, The Notebook, Nights in Rodanthe, Dear John and The Last Song. Two other books are in the process of being made into films; True Believer is expected to be released in 2011; The Lucky One is expected to be released in 2012.

Nicholas Sparks was born on December 31, 1965, in Omaha, Nebraska, to Patrick Michael Sparks, a professor, and Jill Emma Marie (née Thoene) Sparks, a homemaker and optometrist's assistant. He was the middle of three children, with an older brother Michael Earl "Micah" Sparks (1964–) and a younger sister, Danielle "Dana" Sparks (1966–2000), who died at the age of 33. Sparks has said that she is the inspiration for the main character in his novel A Walk to Remember.

FULL ARTICLE AT WIKIPEDIA.ORG
This article is licensed under the GNU Free Documentation License.
It uses material from the Wikipedia article "Nicholas Sparks."