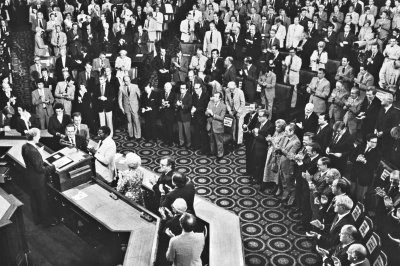 Newton Norman Minow (born January 17, 1926) is an American attorney and former Chairman of the Federal Communications Commission. His speech referring to television as a "Vast Wasteland" is cited even as the speech approaches its 50th anniversary. While still maintaining a law practice, Minow is currently the Honorary Consul General of Singapore in Chicago.

He has been active in Democratic party politics. Minow is an influential attorney in private practice concerning telecommunications law and is active in many non-profit, civic, and educational institutions.

Born in Milwaukee, Wisconsin in 1926, Minow served in World War II from 1944 to 1946 and attained the rank of a sergeant in the U.S. Army. He served in the China Burma India Theater with the 835th Signal Service Battalion headquartered in New Delhi, India. After the war, he received a Bachelor of Science degree in 1949 from Northwestern University and a J.D. degree in 1950 from Northwestern University School of Law. It was possible in the period after the war for law students, who had not completed college, to be granted a bachelors degree after a certain period of study in law school.

FULL ARTICLE AT WIKIPEDIA.ORG
This article is licensed under the GNU Free Documentation License.
It uses material from the Wikipedia article "Newton Minow."
Back to Article
/