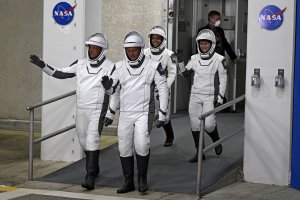 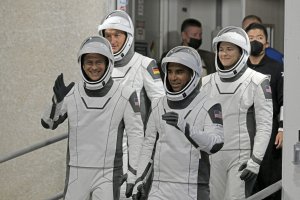 Science News // 1 week ago
SpaceX launches Falcon 9 in Florida space coast's second launch of the day
Florida's Space Coast on Thursday was busier than it's been in decades, launching two separate rockets on the same day for the first time since the heyday of the Space Race.

Top News // 11 months ago
The Almanac
On Aug. 25, 1989, Voyager 2, after a 4 billion-mile journey, made its closest pass over Neptune, sending back images of southern lights and its moon to Earth.

Top News // 11 months ago
On This Day: Voyager 2 makes closest pass of Neptune
On Aug. 25, 1989, Voyager 2, after a 4 billion-mile journey, made its closest pass over Neptune, sending back images of southern lights and its moon, Triton, to Earth.

Top News // 1 year ago
On This Day: Armstrong, Aldrin step foot on the moon
On July 20, 1969, U.S. Apollo 11 astronauts Neil Armstrong and Edwin "Buzz" Aldrin became the first humans to set foot on the moon.

Movies // 1 year ago
Ryan Gosling starrer 'The Actor' coming from 'Parasite' distributors
NEON announced Monday it would co-produce and distribute the upcoming film "The Actor," starring Ryan Gosling as an amnesiac in the 1950s.

This product allows customers to have access to a high quality broadband experience, which is an important factor given the reality of other low priced or even free broadband products

That's one small step for [a] man, one giant leap for mankind

That's one small step for man, one giant leap for mankind

That's one small step for man, one giant leap for mankind

Before becoming an astronaut, Armstrong was in the United States Navy and served in the Korean War. After the war, he served as a test pilot at the National Advisory Committee for Aeronautics (NACA) High-Speed Flight Station, now known as the Dryden Flight Research Center, where he flew over 900 flights in a variety of aircraft. As a research pilot, Armstrong served as project pilot on the F-100 Super Sabre A and C variants, F-101 Voodoo, and the Lockheed F-104A Starfighter. He also flew the Bell X-1B, Bell X-5, North American X-15, F-105 Thunderchief, F-106 Delta Dart, B-47 Stratojet, KC-135 Stratotanker and Paresev. He graduated from Purdue University and the University of Southern California.

A participant in the U.S. Air Force's Man In Space Soonest and X-20 Dyna-Soar human spaceflight programs, Armstrong joined the NASA Astronaut Corps in 1962. His first spaceflight was the NASA Gemini 8 mission in 1966, for which he was the command pilot, becoming one of the first U.S. civilians to fly in space. On this mission, he performed the first manned docking of two spacecraft with pilot David Scott. Armstrong's second and last spaceflight was as mission commander of the Apollo 11 moon landing mission on July 20, 1969. On this mission, Armstrong and Buzz Aldrin descended to the lunar surface and spent 2½ hours exploring while Michael Collins remained in orbit in the Command Module. Armstrong was awarded the Presidential Medal of Freedom by Richard Nixon along with Collins and Aldrin, and was awarded the Congressional Space Medal of Honor by President Jimmy Carter in 1978.

FULL ARTICLE AT WIKIPEDIA.ORG
This article is licensed under the GNU Free Documentation License.
It uses material from the Wikipedia article "Neil Armstrong."