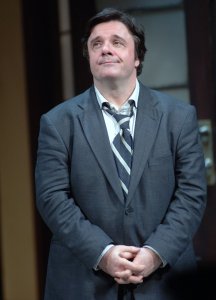 Entertainment News // 7 months ago
What to stream this weekend: 'Yellow Submarine,' 'After Life' S2
A classic Beatles film, the return of "After Life " and the Beastie Boys documentary are just some of the streaming options available this weekend for viewers staying at home during the COVID-19 pandemic.

We've been talking about it, and I'm certain that it will happen

Nathan Lane (born February 3, 1956) is an American actor of stage and screen. He is best known for his roles as Mendy in The Lisbon Traviata, Albert in The Birdcage, Max Bialystock in the musical The Producers, Ernie Smuntz in MouseHunt, Nathan Detroit in Guys and Dolls, Pseudolus in A Funny Thing Happened on the Way to the Forum, and his voice work in The Lion King and Stuart Little. In 2008, he was inducted into the American Theatre Hall of Fame.

Lane was born Joseph Lane in Jersey City, New Jersey, the son of Irish American Catholic parents. He was named after his uncle, a Jesuit priest. His father, Daniel, was a truck driver and an aspiring tenor who died from alcoholism when Lane was eleven; his mother, Nora, was a housewife and secretary, who suffered from manic-depression, and died in 2000. He has two brothers, Robert and Daniel. Lane attended Roman Catholic schools in Jersey City, including Jesuit-run St. Peter's Preparatory High School, where he was selected Best Actor in 1974.

His brother Dan accompanied him to what was supposed to be his first day at St. Joseph's College in Philadelphia, where he had received a drama scholarship. When they arrived, they learned he still couldn't cover enough of the expenses for him to stay, without taking out another student loan, so he decided to go back home. "I remember him saying to me, 'College is for people who don't know what they want to do,'" Dan Lane recalled. Because there already was a Joseph Lane registered with Actors Equity, he changed his name to Nathan after the character Nathan Detroit from the musical Guys and Dolls. He moved to New York City where, after a long struggle, his career began to take off, first with some brief success in the world of stand-up comedy with partner, Patrick Stack, and later with Off-Broadway productions at Second Stage Theatre, the Roundabout Theatre, the Manhattan Theatre Club, and his 1982 Broadway debut in a revival of Noel Coward's Present Laughter as Roland Maule (Drama Desk nomination) with George C. Scott, Kate Burton, Dana Ivey, and Christine Lahti.

FULL ARTICLE AT WIKIPEDIA.ORG
This article is licensed under the GNU Free Documentation License.
It uses material from the Wikipedia article "Nathan Lane."
Back to Article
/