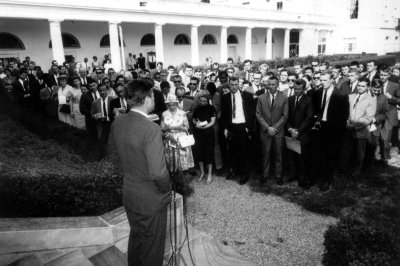 NBA // 4 years ago
Ex-Portland Trail Blazers All-Star Brandon Roy wounded in Los Angeles shooting
Former NBA All-Star guard Brandon Roy was wounded in a shooting over the weekend in the Los Angeles area but is expected to recover.
Odd News // 7 years ago
Most U.S. Founding Fathers were age 40 and younger
Portraits of the U.S. founding fathers often portray them with white powdered wigs and many think they were older than the young men they were, an expert says.
U.S. News // 8 years ago
Mom charged after threatening teacher
A Cleveland mother has pleaded not guilty to charges she threatened to shoot employees at her son's elementary school.
U.S. News // 8 years ago
Under the U.S. Supreme Court: Free speech and Islam on fire
How can the U.S. government allow a shadowy Los Angeles area man to make and show an anti-Islam film that has outraged Muslims across the globe and ignited protests in North Africa and the Middle East that resulted in the deaths of four Americans, including an ambassador, and put other U.S. diplomats and military in the greatest danger?
Odd News // 1 decade ago
New York: The target called 'Ground Zero'
It was a perfect target, this place they now call Ground Zero.

Nathan Hale (June 6, 1755 – September 22, 1776) was a soldier for the Continental Army during the American Revolutionary War. He volunteered for an intelligence-gathering mission in New York City but was captured by the British. He is probably best remembered for his purported last words before being hanged: "I only regret that I have but one life to lose for my country." Hale has long been considered an American hero and, in 1985, he was officially designated the state hero of Connecticut.

Nathan Hale was born in Coventry, Connecticut in 1755. In 1768, when he was thirteen years old, he was sent with his brother Enoch to Yale College. Nathan was a classmate of fellow patriot spy Benjamin Tallmadge. The Hale brothers belonged to the Yale literary fraternity, Linonia, which debated topics in astronomy, mathematics, literature, and the ethics of slavery. Graduating with first-class honors in 1773, Nathan became a teacher, first in East Haddam and later in New London. After the Revolutionary War began in 1775, he joined a Connecticut militia and was elected first lieutenant. When his militia unit participated in the Siege of Boston, Hale remained behind, but, on July 6, 1775, he joined the regular Continental Army's 7th Connecticut Regiment under Colonel Charles Webb of Stamford. He was promoted to captain and in March 1776, commanded a small unit of Lt. Col. Thomas Knowlton's rangers defending New York City. They managed to rescue a ship full of provisions from the guard of a British man-of-war.

During the Battle of Long Island, which led to British victory and the capture of New York City via a flanking move from Staten Island across Long Island, Hale volunteered on September 8, 1776, to go behind enemy lines and report on British troop movements. He was ferried across on September 12. It was an act of spying that was immediately punishable by death and posed a great risk to Hale.

FULL ARTICLE AT WIKIPEDIA.ORG
This article is licensed under the GNU Free Documentation License.
It uses material from the Wikipedia article "Nathan Hale."
Back to Article
/