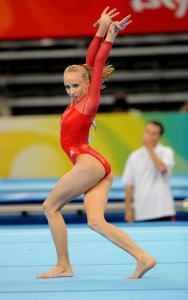 Anastasia Valeryevna "Nastia" Liukin (Russian: Анастасия "Настя" Валерьевна Люкина (Anastasiya "Nastya" Valeryevna Lyukina); born October 30, 1989) is a Russian-American artistic gymnast. She is the 2008 Olympic individual all-around gold medalist, the 2005 and 2007 World Champion on the balance beam, and the 2005 World Champion on the uneven bars. With nine World Championships medals, seven of them individual, Liukin is tied with Shannon Miller as the American gymnast having won the most World Championship medals. Liukin has also tied Miller's record as the American gymnast having won the most medals in a single non-boycotted Olympic Games.

The daughter of two former Soviet champion gymnasts, Olympic gold medalist Valeri Liukin - the first man to do a triple backflip - and World Champion rhythmic gymnast Anna Kotchneva, Nastia Liukin was born in Moscow and moved to the United States as a young child. She began gymnastics after spending time in the gym while her parents coached. Liukin is coached by her father at the World Olympic Gymnastics Academy, her family's gymnastics club in Plano, Texas.

FULL ARTICLE AT WIKIPEDIA.ORG
This article is licensed under the GNU Free Documentation License.
It uses material from the Wikipedia article "Nastia Liukin."
Back to Article
/