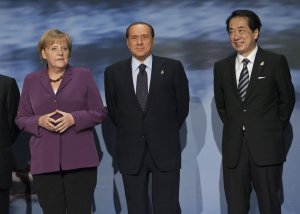 Top News // 4 years ago
The Almanac
On June 1, 2009, Air France Flight 447 from Rio de Janeiro to Paris plunged into the Atlantic Ocean, killing all 228 people on board.

The pace of decline in prices is slowing somewhat, but prices are still falling

There in fact were various opinions (about the plant's safety) before the accident, but no well-thought-out preparations were made

That accident was beyond our expectations, so there were no preparations to cope with it properly

Naoto Kan (菅 直人, Kan Naoto?, born 10 October 1946) is a Japanese politician, and former Prime Minister of Japan. In June 2010, then-Finance Minister Kan was elected as the leader of the Democratic Party of Japan (DPJ) and designated Prime Minister by the Diet to succeed Yukio Hatoyama. On 26 August 2011, Kan announced his resignation. Yoshihiko Noda was formally appointed as Prime Minister by the Emperor of Japan on 2 September 2011.

Kan was born in Ube City, Yamaguchi Prefecture, as the son of Hisao Kan, an executive for a glass manufacturer. He graduated in 1970 from the Tokyo Institute of Technology and became a licensed benrishi (patent agent/attorney) in 1971.

His hobbies are go, shogi and origami. Kan built a machine to calculate the complicated mahjong point system and applied for a patent in 1973.

FULL ARTICLE AT WIKIPEDIA.ORG
This article is licensed under the GNU Free Documentation License.
It uses material from the Wikipedia article "Naoto Kan."
Back to Article
/