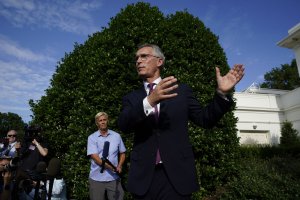 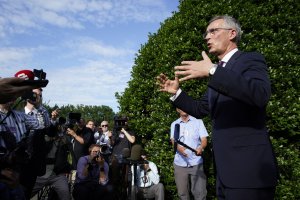 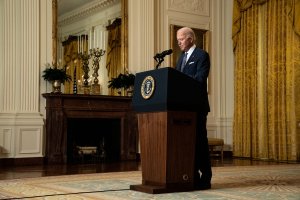 The North Atlantic Treaty Organization or NATO ( /ˈneɪtoʊ/ nay-toh; French: Organisation du traité de l'Atlantique Nord (OTAN)), also called the (North) Atlantic Alliance, is an intergovernmental military alliance based on the North Atlantic Treaty which was signed on 4 April 1949. The NATO headquarters are in Brussels, Belgium,[3] and the organization constitutes a system of collective defence whereby its member states agree to mutual defense in response to an attack by any external party. For its first few years, NATO was not much more than a political association. However, the Korean War galvanized the member states, and an integrated military structure was built up under the direction of two U.S. supreme commanders. The first NATO Secretary General, Lord Ismay, famously stated the organization's goal was "to keep the Russians out, the Americans in, and the Germans down".[4] Doubts over the strength of the relationship between the European states and the United States ebbed and flowed, along with doubts over the credibility of the NATO defence against a prospective Soviet invasion—doubts that led to the development of the independent French nuclear deterrent and the withdrawal of the French from NATO's military structure in 1966. After the fall of the Berlin Wall in 1989, the organization became drawn into the Breakup of Yugoslavia in the 1990s which resulted in NATO's first military operations in Bosnia from 1991 to 1995 and later Yugoslavia in 1999. Politically, the organisation sought better relations with former potential enemies to the east, which culminated with several former Warsaw Pact states joining the alliance in 1999 and 2004. The September 2001 attacks signalled the only occasion in NATO's history that Article 5 of the NATO treaty has been invoked and consequently the 11 September attacks were deemed to be an attack on all nineteen NATO members.[5] After 11 September, troops were deployed to Afghanistan under the NATO-led ISAF and the organization continues to operate in a range of roles sending trainers to Iraq, assisting in counter-piracy operations[6] and most recently enforced a NATO-led no-fly zone over Libya in 2011 in accordance with UN SC Resolution 1973. The Berlin Plus agreement is a comprehensive package of agreements made between NATO and the European Union on 16 December 2002. With this agreement the EU was given the possibility to use NATO assets in case it wanted to act independently in an international crisis, on the condition that NATO itself did not want to act—the so-called "right of first refusal".[7] There are currently 28 member states of NATO, with the most recent being Albania and Croatia who joined in April 2009.[8] The combined military spending of all NATO members constitutes over 70% of the world's defence spending.[9] The United States alone accounts for 43% of the total military spending of the world[10] and the United Kingdom, France, Germany, and Italy account for a further 15%.[9]

FULL ARTICLE AT WIKIPEDIA.ORG
This article is licensed under the GNU Free Documentation License.
It uses material from the Wikipedia article "NATO."